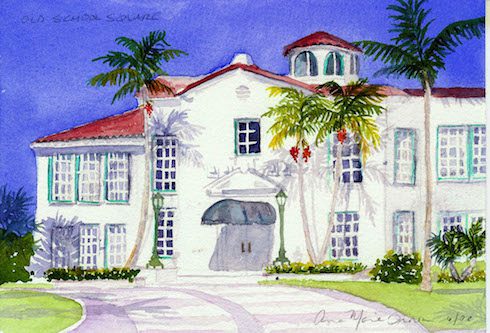 How an old schoolhouse became the cornerstone of the arts in Delray Beach.

Watercolor by Anne Marie BrownThe opening of Delray’s Cornell Museum of Art in March of 1990 marked much more than the culmination of years of hard work. It also marked an important first step in the renaissance of Delray Beach, a town on the edge of decline throughout the late 1980s.

Western migration and the opening of regional malls in Boca Raton and Boynton Beach had left Atlantic Avenue storefronts vacant, and led Palm Beach County School District leaders to close the historic school buildings—a 1913 elementary school, a 1925 high school and a vintage gymnasium—in downtown Delray. Fenced off for several years, the overgrown property at Swinton and Atlantic avenues was neglected until then-mayor Doak Campbell approached Delray Beach Historical Society leaders—including the society’s then-vice president, Frances Bourque—with an idea to restore the historic buildings and transform them into a cultural center.

Delray Center for the Arts at Old School Square, like the phoenix, has risen and evolved into a monument for community spirit, thanks to intense lobbying of state officials and grassroots fundraising efforts—such as the auctioning off of street names and an old-fashioned prom in the Vintage Gymnasium. Despite naysayers in the community who argued the project was a waste of money, organizers persisted and today, Old School Square—with its theater, art museum, gymnasium and outdoor pavilion—has been transformed into Delray Beach’s modern day town square, a gathering place week after week for events representing the town’s diverse cultural activities.

Five Who Helped Make The Square What It Is Today

Considered the mother of Old School Square, Frances Bourque was driven by a strong sense of community to help create what she calls today the heart and soul of Delray Beach. Leading the efforts to preserve the historic school buildings in downtown, Bourque brought the community together, first by persuading state historic preservation officials to provide a $350,000 initial renovation grant, and later by highlighting every successful step to prove that the dream would indeed become a reality.

As the chair of the committee charged with making the project a reality, Bourque traveled to Tallahassee several times to receive funding and a historic designation from the state’s Bureau of Historic Preservation. Guided by a passion for helping to restore a sense of community to Delray Beach, Bourque says there was never a point where she became discouraged nor thought of giving up the goal of providing a vital service to a community weathering economic hard times. The organization’s first president, Bourque remains on the board of directors and sees the Delray Beach Center for the Arts as still evolving, with much more yet to do.

“I loved everything we were able to do as a community. It was magical. There were times when we wondered how we were going to make it happen, but we always found answers. We never quit believing it would work.”

The face of the Square for decades, Gillie had been handling public relations for the Caldwell Theatre in Boca Raton in 1990 when he was asked to join the board of Old School Square. A short time later, he was tapped to lead the organization as it evolved to reflect changes in the arts.

Gillie, who is retiring this fall, led the organization’s transformation into a major cultural center in South Florida. He takes pride in never missing a performance when he’s in town and also in helping guide the project to national recognition—first as part of Delray’s designation as an All-America City in 1993 and later, when it was honored at the Smithsonian Institution for how it used the arts to affect positive community change. Gillie is credited for bringing quality performances and programming to the Delray Center for the Arts and for shepherding its constant growth from a one-building art museum to a multifaceted cultural center.

“The Delray Beach Center for the Arts is a center for everyone. It is a safe place where all in the community can come and express an opinion. It is truly common ground.”

President Emeritus of the Delray Center for the Arts

A longtime Delray resident, Bob Chapin joined the board of Old School Square in 1989, before the first building opened. A respected lawyer and former member of the city council, Chapin served as the board’s third president from 1997 to 2003, bringing his strong business sense and fundraising background to the table.

During his eight years as president, Chapin helped create a stable structure for the organization. He arranged to have a financial professional join the staff and used his local connections to help secure much-needed funding.

“Old School Square went from a startup cultural organization to a regional cultural facility. It mirrored the transformation of Delray Beach from a sleepy ‘Village by the Sea’ to a trendsetting community.”

A painter and well-known member of the local arts community, Gloria Adams first became involved in Old School Square as a volunteer in 1988, during the early planning stages. She became director of the Cornell Museum prior to its opening and spent 25 years helping to bring innovative and creative exhibits to the museum, which specialized in American culture as well as art. Among Adams’ favorite exhibits were a mid-1990s collection of hand-carved birds and another featuring carousels. Adams, who retired last year, says that what started as a job ended up being a passion.

“Members of the arts community were so excited to have a venue to show their work, and I was so excited to be able to provide that for them.”

Architect for Old School Square And Board Member

When it came to the selection of an architect to help with the planning and design of Old School Square, Bob Currie was a natural. Currie’s role went beyond designing buildings. In the early years, he was integral in helping to determine the direction Old School Square would take as coordinators set out to create an organization to meet the community’s cultural needs.

Currie worked closely with founder Frances Bourque, traveling to Tallahassee to help share the vision for Old School Square and to lobby state officials for a much-needed historic designation, which was required before state officials would consider issuing a historic preservation grant. He has been involved in six different phases of plans, from the original design and master plan to designing the outdoor pavilion, all requiring a commitment to the historic heritage of the buildings while at the same time providing functionality.

“I love this town, and there’s never been a more important project for this town than Old School Square. It was the spark that turned this town around.”

Five Others Who Helped the Square

Bill Branning: Currently board chair for the Delray Center for the Arts, Branning helped lead the physical restoration project, first as the original estimator while at Tom Head Construction and later through his own company, BSA Corporation, which was the building contractor for much of the restoration.

Doak Campbell: As mayor in the late 1980s, Campbell had the idea to transform three historic school buildings into a cultural and historic center. He later helped persuade town leaders to provide financial support for the project.

George and Harriet Cornell: Philanthropists after whom the Cornell Museum is named, the Cornells were the first private contributors to Old School Square and bequeathed several million dollars to the project.

Sandy Simon: A Delray native who attended the historic schools that formed Old School Square, Simon served on the board of Old School Square and through his books and advocacy has furthered discussions about the city’s cultural impact.

Martie Lattner Walker: Through her family foundation and private gifts, Walker made the original largest gift of $500,000 to develop the Crest Theatre. She continued to help shape the venue’s lecture series and children’s programs through financial support.