A new show just for gamers gets its start in Boca 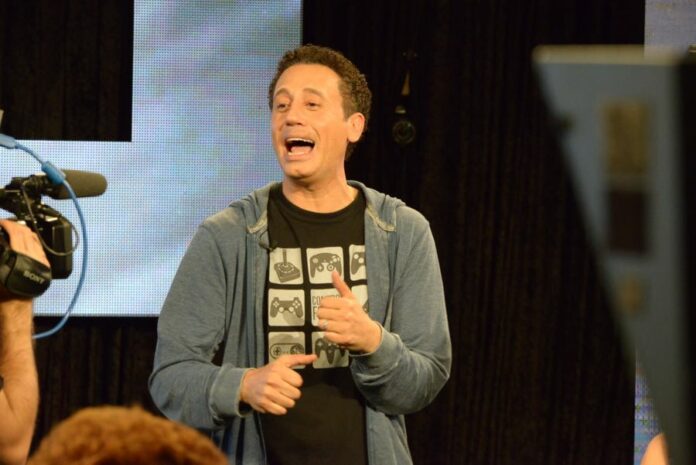 “How can I do something that I really love?” Eddie Mady, (above) CEO of Mady Multimedia and now creator and host of the new video game entertainment show OPgamers, thought to himself nine months ago. After months of brainstorming and long hours of preparation, Mady posted the premiere episode of OPgamers to YouTube on June15.

OPgamers (OP stands for “over-powered” for you novices in the gaming world) is an entertainment show that features the video game world’s “funniest and most epic moments,” according to Mady. In addition to Mady as the host, the show’s cast includes two video game fanatics, Heather and Jon, as commentators and DJ Romi, who keeps the audience, both in the studio and at home, entertained with her musical talents.

In just one week, only promoting the show by sharing it with friends on Facebook, the pilot has garnered over 127 thousand views and nearly 200 comments. And the whole production took place in a small warehouse studio in Boca Raton.

“I think you create your own luck,” said Mady, 43, a resident of Boca and avid video gamer since he was old enough to hold a controller. While his own TV show is a new experience for him, Mady is no stranger to the entertainment business; he works with his father and sister at their video production companies, Mady Films and Mady Multimedia, and was previously an emcee for private events for 20 years.

The video game world is made up of millions of people, all with very different tastes, Mady explained. Therefore, OPgamers features varied video game content to reach the mass-market of gamers. Mady added that gamers also come from all different age groups and walks of life. Despite what many might believe, the average age of gamers is actually 34-years-old, and because of this, OPgamers has been developed as an adult video game show—not one for your 12-year-old brother who obsessively plays video games all day instead of playing outside.

OPgamers has not found a network to call home yet, but Mady is weighing the show’s options now and wants to make a decision in the next two months. Depending on the network deal, Mady hopes the show will be a weekly 22-minute show, with 36 episodes a season—and revenues derived from advertising. Mady has also received offers from companies that want to sponsor OPgamers and produce merchandise for the show. Until a network deal is made, viewers can watch the pilot episode at opgamers.com/ep1. The YouTube channel also contains video game- related comedy sketches.

Casey Farmer is a sophomore at Lehigh University studying journalism and business, who is interning at Boca Magazine this summer. Casey spends most of her time on the golf course, both recreationally and as a member of Lehigh’s team. Aside from golf, she loves iced coffee, Zumba and dogs. You can reach Casey at caseyfarmer@bocamag.com.