Alternative Music is Back on SoFla Radio 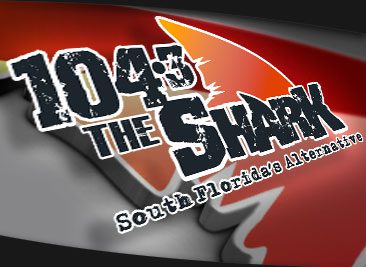 Visiting cities like Austin and Asheville over the past year has reminded me of at least one thing big, hip cities with young demographics have over all of South Florida: a great alternative rock station that is fully entrenched in the regions’ musical communities.

It’s only been four years since South Floridians lost The Buzz on 103.1, West Palm Beach’s longtime alt-rock powerhouse, which brought 15 annual music festivals to South Florida during the ‘90s and 2000s. But it feels like it’s been longer than that: FM radio has become such a cesspool of corporate-backed redundancy that it’s hard to find any music station that isn’t bombarding us with a aggressively limited selection of Maroon 5 and Bruno Mars hits as nauseum.

Until last Friday, that is. That’s when 104.3-FM flipped from a useless simulcast of an already vibrant AM sports station to an alternative music lover’s bastion called The Shark. As I’m writing this, I’m hearing “Fight For Your Right” by the Beastie Boys again, on the actual radio, in South Florida. Earlier, I heard a wonderful new single from Beck, as well as breakthrough tunes from Halsey, George Ezra and Atlas Genius—even the “Unplugged” version of Nirvana’s “All Apologies.” The station has expanded its definition of alternative to include edgy pop (Lorde, Amy Winehouse), reggae (Bob Marley is in regular rotation) and New Wave (Depeche Mode, The Cure).

Why does this excite me so much? Nobody needs terrestrial radio anymore. The Shark has a considerably large playlist, but it’s infinitesimal compared to the music library that your phone carries commercial-free, and every car these days has an auxiliary input to override its radio. I’m sure some of my excitement about this station comes from the fact that South Florida isn’t so behind the 8-ball anymore when it comes to breaking alternative music. But more than that, it’s the community potential that this station opens up.

Program director John O’Connell, who also served as PD of The Buzz, could not be reached for comment, but I’m hoping that on-air talent will be hired, and that these deejays will bring their tastes and personalities to their selections. And I’m hoping that we’ll get another annual music festival out of it, the kind that might attract the likes of Green Day, Lorde, Bleachers and Tove Lo to the Perfect Vodka Amphitheatre. This may be too much to ask for a station that is still undoubtedly finding its audience, but a boy can dream, right?