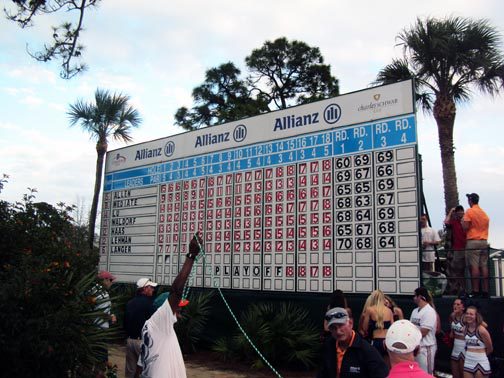 Sunday at The Old Course may not carry the cachet of a closing round on one of golf’s hallowed layouts. But what the venerable tract at Broken Sound lacks in name recognition it continues to make up for in final-round drama at the Allianz Championship.

Four years ago, it was Boca resident Bernhard Langer chipping out of a buried lie on the green-side bunker at 18 to capture the tournament in sudden death. Two years ago, with his tee shot pinned against a tree root on the par-3 14th, Corey Pavin somehow powered an upside-down 8-iron to within 4 feet, leading to his first Champions Tour victory.

This past Sunday, Michael Allen added a few signature moments of his own to a tournament that has gone to a sudden-death playoff three of the last five years. In capturing his sixth Champions Tour event, the 55-year-old Allen, who set the tournament record with an opening round 60, was a one-man highlight—and lowlight—reel. After draining a sweeping 50-footer for birdie on the 14th, resulting in one of his hybrid happy dances (“It’s supposed to be the cha-cha … I tried, obviously unsuccessfully,” he quipped later), Allen seemed poised to hold off a final-day charge by Duffy Waldorf.

On the par 3, 16th, after slightly overshooting the green, Allen misread a short par putt that left him tied with Waldorf at 17-under. Then, after a brilliant second shot on the par 4, 17th, Allen missed a 3-foot birdie putt that curled around three-quarters of the cup and lipped out.

Both Allen and Waldorf, who was looking for his first Champions Tour win, would birdie the par 5, 18th to finish tied at 18-under and force a playoff. But on the first playoff hole, Allen again flirted with disaster, pulling his tee left and into patch of pine straw-covered trouble. Without a clear shot to the green, he pulled a 6-iron and, from 185 yards, somehow fit his second shot between two palm trees—and onto the green. Both he and Waldorf would two putt for birdie, forcing a second playoff hole.

Again, Allen tempted fate, this time pushing his tee shot to the right and under a golf cart. The cart, being operated by someone from the Golf Channel, nearly ran over the ball. When order was restored, Allen was left with nearly 200 yards to the pin, again off the pine straw. For second time, he worked his 6-iron magic, lifting his second shot to within 35 feet and two-putting for birdie. Waldorf would dump his second shot in the front-side bunker, in a similar spot from where Langer launched his dramatic chip in 2010. There would be no such miracle for Waldorf, who hit a good shot out of the trap but missed the 6-footer for birdie.

The Sunday crowd at The Old Course seemed a bit thin compared to years past—perhaps the threat of rain and lack of more compelling names at the top of the leaderboard kept people inside; the tournament will release official attendance numbers later. It’s the eighth year that Boca has hosted the Allianz, which tournament officials say has a $15 million economic impact on the city. As far as final-round plot-lines go, we’re certainly getting our money’s worth.

But you tell us. How did this year’s Allianz compare for you to years past?