Atlantic Crossing up in the air and other news of note 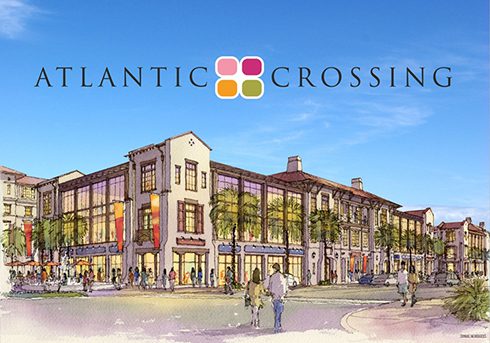 An amicable, timely resolution of the dispute between Delray Beach and the developers of Atlantic Crossing still could happen, but it looks much less likely.

On Friday, Atlantic Crossing agent Mike Covelli sent a hostile letter to the city, demanding a hearing on the plat for the project. This followed Atlantic Crossing’s June lawsuit, in which the developers criticized the city for delaying final site plan approval.

The flashpoint remains an access road to Atlantic Crossing from Federal Highway—Northeast 6th Avenue—on the west side of the project. It had been on the site plan, and then came off as the result of a city commission vote in January 2014. Delray Beach also had agreed in February 2009 to give up the portion of Northeast 7th Avenue that would be within the project’s boundaries.

Because of the letter, City Attorney Noel Pfeffer asked for a special commission meeting at 4 p.m. Wednesday. Pfeffer first told the commission that the city “disputes” Covelli’s statement that Delray Beach is intentionally delaying final approval of what remains a very controversial project. He’s right. This commission understands that it can’t undo the December 2012 commission vote for Atlantic Crossing.

Pfeffer’s immediate concern is that Covelli’s letter could be an attempt to “trigger” a process that would give the city just five days from the date of the letter to protect its rights concerning the alley. Basically, if the city didn’t respond, the city would waive any right to the alley/access road. It might never get back into the site plan. The five-day deadline was Wednesday at 5 p.m.

So the commission approved Pfeffer’s request to notify Atlantic Crossing by the deadline that the city was seeking to take back the alley because the developer has failed to meet certain conditions in that 2009 agreement, such as digging a tunnel under Seventh Avenue. Just as the June lawsuit was about the developers protecting themselves and their options, the city is doing the same.

The whole thing took about five minutes. Pfeffer advised commissioners to “minimize” their comments. He will hold an executive closed-door session soon to discuss the lawsuit and the city’s response.

Just a few weeks ago, the city and Atlantic Crossing seemed close to working out the return of the alley, which the commission believes would help traffic around the project. There was talk of having it all worked out by September. Then the commission delayed, and momentum stalled. Now the tone is tough, though still guarded.

Working things out is the best potential outcome—especially, it would seem, for Atlantic Crossing. If the developers want a timely resolution, litigation seems the least likely way to achieve it.

I’m told that the dispute between Boca Raton and the city’s police/fire pension board has been resolved in the city’s favor.

Last month, the city council approved a resolution demanding that the board change its interpretation of the new police contract. City Manager Leif Ahnell claimed that the board had approved annual cost-of-living increases for some retired police officers “in a manner that is in direct conflict” with the contract. In the resolution, the city warned of a lawsuit under the Florida Government Conflict Resolution Act if the board went ahead.

The board meets today. Matt Welhaf, a board member chosen by the firefighters union, told me Wednesday that the dispute was less between the board and more between the police union – the Fraternal Order of Police – and the city. The board first interpreted the contract one way, Welhaf said, but now agrees with the city’s interpretation. “It’s not a big matter.”

That isn’t how the city saw it. Pension reform was a council priority. Pension savings projected over 30 years depend on compliance with new police and fire contracts.

Such disputes can arise because of how state law structures police/fire pension boards. Boca Raton’s has eight members. The fire union and police union each choose two members. The city council appoints the other four, usually people with expertise in a related field, such as finance. The board determines how to invest the pension fund’s assets.

The structure gives the unions equal weight with the city. Union appointees may live in the city—Welhaf does—but not necessarily. That can create a disconnect. It also can frustrate council members that the city ultimately is responsible for filling any pension fund gaps, but the city has no direct say over the fund’s investments.

Lee Sommer, a police union member who chairs the board, declined to answer emailed questions, saying answers should come from the board. A phone call to the union’s president, John Cagno, was not returned. Mayor Susan Haynie, though, told me that she is happy the board and the city could “find consensus.”

For all the debate about redevelopment in downtown Boca Raton, the issue also is a concern in other parts of the city. We saw that at the July 27 city council workshop.

Robert Weinroth had asked the staff to prepare an ordinance—Boca’s version of legislation—for discussion at the next night’s council meeting. The ordinance would have nearly doubled—from 2,500 to 4,500—the number of residential units allowed in the city’s northwest section under Boca’s Planned Mobility Development regulations. Jut the idea of the ordinance had been enough to generate hostile emails and phone calls to council members. Broken Sound residents, who live just west of the designated area, are among the city’s most reliable voters. Four-fifths of the council – Mike Mullaugh, Jeremy Rodgers, Scott Singer and Weinroth – live in northwest After hearing strong opposition from his colleagues, Weinroth withdrew the ordinance. The issue, however, deserves some discussion.

Start with the history.

In 1978, Arvida Corp., created the Arvida Park of Commerce—700 acres on and around Congress Avenue north of Yamato Road. At the time, it was a groundbreaking light industrial research park, with the wonderful acronym LIRP. Coupled with the then-booming IBM complex south of Yamato – now Boca Corporate Center – the park attracted many employers. “It made the city’s tax base,” Haynie told me.

Zoning in the park—which last spring was renamed The Park at Broken Sound—prohibited housing. Eventually, however, companies approached the city seeking a change that could allow their employees to live nearby. The city liked the idea of reducing traffic—or at least reducing the distance people had to drive.

So in December 2012 the city council approved new regulations that allow for up to 2,500 multi-family units in the area basically north of Spanish River Boulevard between Interstate 95 and Military Trail. The regulations encouraged commercial development that would appeal strictly to people living in the area—no, or limited drive-through service, for example.

The city capped development because, however good the intentions, no one knew if the concept would work. If it didn’t, traffic could get worse, not better. “If it had been open-ended,” Haynie said, “We could have had 10,000 homes out there.”

As the staff memo on the ordinance told the council, the city has approved just three projects under the Planned Mobility Development regulations. The projects amount to 1,050 units. None has been built. Another 592 units are under review. The city rejected a At the workshop, Weinroth said he considered the 2,500 figure “arbitrary.” Haynie and Councilman Mike Mullaugh, who both supported the regulations, told him otherwise. A review of the backup material in 2012 shows that much thought went into the number. On Wednesday, Weinroth acknowledged, “I think I’ve been corrected. I took their comments to heart. I think I moved too quickly.”

A back story is the talk of Boca Corporate Center being sold. Elad Properties, which proposed and then withdrew the New Mizner on the Green condo complex downtown, has been rumored as a buyer. A new buyer might want more potential for housing. Given the council’s caution, however, any new buyer should not count on having that potential anytime soon.

Randy Schultz was born in Hartford, Conn., and graduated from the University of Tennessee in 1974. He has lived in South Florida since then, and in Boca Raton since 1985. Schultz spent nearly 40 years in daily journalism at the Miami Herald and Palm Beach Post, most recently as editorial page editor at the Post. His wife, Shelley, is director of The Learning Network at Pine Crest School. His son, an attorney, and daughter-in-law and three grandchildren also live in Boca Raton. His daughter is a veterinarian who lives in Baltimore.