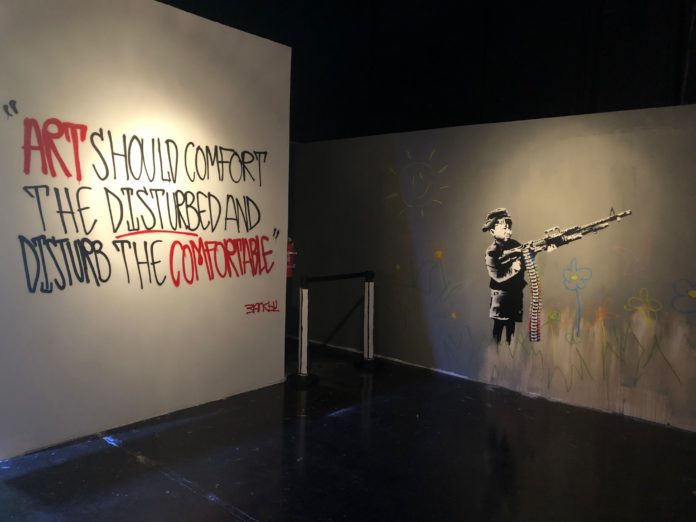 Banksy may be the most famously elusive artist in the world, but a recently opened exhibition at Miami’s Ice Palace Studios may be the closest approximation of entering his head.

“The Art of Banksy: Without Limits,” fresh off its American premiere in Atlanta, is mounted in the same space as “Beyond Van Gogh,” which we reviewed last year. With wall placards explaining the history and the artist’s motivation behind each piece, “Without Limits” presents as a more “traditional” museum show than that fully immersive foray into Van Gogh’s universe. But its carnivalesque atmosphere is also a far cry from a hushed evening at the Met or the Louvre.

In addition to framed prints, stencils and paintings, there are sculptures, videos and gallery-filling installations. Work is presented on the ceilings and floors and directly onto the venue’s walls, running the gamut from the size of a postcard to a walkable reproduction of a London Underground tube station. It’s easy to get lost amid the spectacle, and that’s a compliment.

Curated segments of “Without Limits” are grouped by theme: immigration, religion, politics, consumerism, police brutality, war. Some of Banksy’s works, even the most famous ones, seem imbued with hollow shock value: The Queen of England re-imagined as Ziggy Stardust, Churchill sporting a neon punk Mohawk, Charlie Brown committing arson with a gas can and lit cigarette.

But more often than not, his straightforward ironies, his shaken and stirred appropriations of popular culture, resonate with a visceral urgency. In “Dove of Peace,” the title avian sports a bulletproof vest. “Anti-Immigration Birds,” in which a group of gray pigeons stakes a claim on a wire and carries signs such as “go back to Africa” in front of a sheepish bird of color, highlights the absurdity of xenophobia. In the brutally effective “Media Canvas,” a bloodied girl stands on the rubble of her former home. But before aid workers can come to her assistance, a news crew, eager to capture an exploitative money shot, holds them back.

In my favorite piece in the exhibition, a collage of televisions broadcast an animation in which a girl floats above the carnage in Syria by clutching a red balloon, one of Banksy’s recurring symbols. She bearing witness to the devastation, but we soon realize that she, like other balloon holders carried aloft, are ascending to heaven; they are the war dead. It’s a gut punch that’s hard to shake.

Yet the artist is also a humorist, a prankster. You will laugh out loud many times during “Without Limits.” Banksy delights in the surprising contrast—the elderly nanas knitting anti-authoritarian quilts in “Grannies” or the policeman perusing the contents of innocent Dorothy Gale’s picnic basket in “Stop and Search.” In “Venus,” one of his “Crude Oil” Old Master referential paintings (Banksy had a certain genius for puns), the svelte reclining nude viewed famously from behind is revealed, through a mirror, to have a busted nose, disrupting our preconceptions of beauty.

There is even the occasional unexpected note of sweetness, as in the recent “Game Changer,” in which a boy plays with an action figure of an N95-masked health care worker alongside his bucket of comic book superheroes.

Yet nothing in Banksy’s world is sacred. Most of the prints’ descriptions contain their original sales figures, which would be a gauche and inappropriate addition in any museum. It underlines the uneasy tango Banksy dances with the art market, his $50 million net worth cheekily juxtaposed against the anti-capitalism message of so much of his work.

With pieces like “Festival,” which depicts concertgoers queuing up to purchase $30 “Destroy Capitalism” T-shirts, you can hear the echo of Banksy laughing all the way to the bank. Naturally, inevitably “Without Limits” exits through the gift shop. I would have bought a shirt, too, if my favorite designs hadn’t been sold out.

Part of Banksy’s genius is that no decoder rings are needed to decipher his art. At first glace, you “get it;” it’s all there, on the surface, and the messaging is as potent as a shot of Fireball. Like any good capitalist, he understands the power of branding and repetition, of recycling his best ideas: The iconic “Flower Power,” which depicts a rioter hurling a bouquet instead of a Molotov cocktail, turns up again and again throughout “Without Limits,” and it’s far from the only repeated motif. By the end of the exhibition, I wanted a poster of this image: He hooked me.