Pulling More Out of the Man 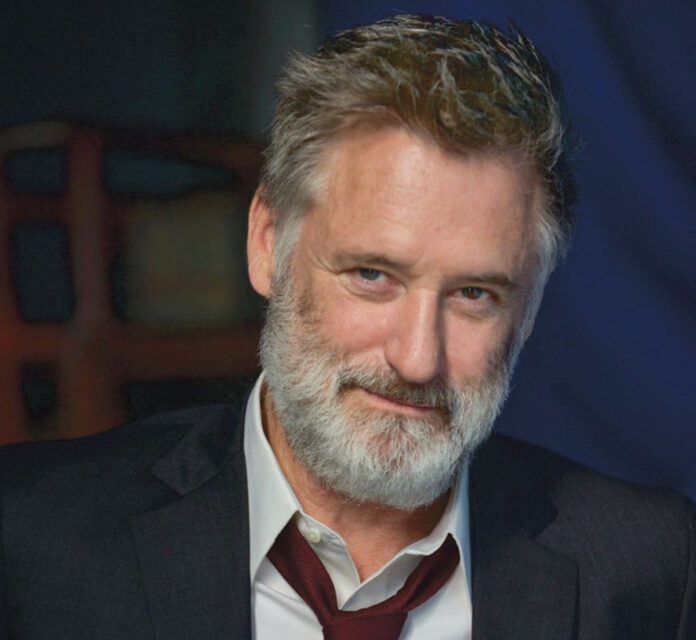 In the March issue of Boca magazine, I interview actor Bill Pullman about subjects such as his onscreen persona, stage acting, his acumen for presidential roles and his off-camera life. But the conversation went other places, too, and Pullman was generous enough to continue the dialogue for a few additional questions. Here is the remainder of our conversation, beginning with his latest lead role at the time, in the throwback western “The Ballad of Lefty Brown.”

You disappeared marvelously into the title character of “The Ballad of Lefty Brown.” It struck me as a different kind of role for you, and a different kind of western—more in line with John Ford and William Wyler films than the grittier, revisionist westerns that are occasionally produced. Did you take inspiration from the classics when you researched and refined this character?

I didn’t spend a lot of time studying sidekicks or anything, but I’m old enough to have been really informed by matinees in my hometown on a Saturday afternoon, because in those days, kids didn’t go to movies at night. They’d go to matinees, and walk to the theater and go home afterward, and they were usually World War II pictures or westerns that I remember vividly. I think those things have been particularly brought to the fore thinking about “Lefty Brown.”

Why do you think the Western has endured so much as a time and a place? Directors have grafted just about any genre onto it—thrillers, comedies, adventures.

Yeah, I think that started to happen in the ‘70s and ‘80s, and it can go south. The form has a very enduring audience, though it’s not the dominant form, which it was from the late ‘40s to the ‘60s. But I think the westerns that are made now are a little more selective about topic and subject matter, and they are usually some kind of critique. It’s implicit that whatever you’re doing has some kind of reference to something happening now in our country, because it’s so connected to the identity of America and westward expansion. It’s not that they have to be spot-on relevant, but it’s just something that happens. Are we too violent?, is often the question now. Do we respect the rule of law now, or don’t we? Are we empowering the individual over the community now?

I think with “Lefty Brown” it’s interesting that there is some question about the institution of the rule of law being denigrated by mistreatment, which is something that’s in our news now. But it’s more, in a way, about a more personal, emotional ingredient for humanity, and not necessarily a critique of our country, because I think our story is about loss. Lefty has the best friends in the world, he thinks, and he loses Edward and then he loses Jimmy, who betrays him, and then Tommy dies in his arms, and he’s left alone. There’s great pain in accepting responsibility to protect someone he feels he owes.

Of all the films you’ve done, my two favorites have been most underrated—“Lost Highway” and “The End of Violence,” both directed by masters of ambiguity and nuance. I feel they may have been too cerebral for a mainstream audience.

I wonder. I was so glad when “End of Violence” started to appear at religious film festivals. I had never heard there was such a genre. Because of the complexity of thought about it and the thoughts about our choices, it found some kind of audience there. But I agree, I wish more people had seen it.

In the complicated “Lost Highway,” were you fully aware of everything that was going on, or were you as “in the dark” as your character was?

You think of how compartmentalized one person can be, that if he gets accused of murdering his wife and he’s a saxophone player living in the L.A. basin, and wants to become someone who couldn’t possibly kill his wife, he’s a different person than that, and he’s a garage mechanic in the valley—that’s the flipside of that. There couldn’t be a possible link between those two. That sense of becoming whatever you have to become in order to not be guilty was O.J. Simpson at the time. [Director] David Lynch never mentioned it while we were making it. But I did think of the metaphor of somebody who needs to become someone else in order not to be guilty, and what lengths the psychology of a person will go to to not be guilty of something, and how you can be so walled off to your true self.

Do you have any thoughts on revelations of sexual harassment that have come out against so many prominent actors, directors and producers?

It definitely has been culturally significant to have those issues come to the fore. It’s coming at the right time to try to do a correction on something that people have sensed was wrong about our culture, and wanting to get it right. It’s not going to go back in the can. The next wave will be to build institutional protections. There’s certain pockets of culture that have had those kind of controls. A lot of businesses and corporations have had policies about sexual harassment, but a lot of others haven’t, and they’ve got to get with the program.

Speaking of sexism in Hollywood, you also co-starred in “Battle of the Sexes” last year as an outwardly misogynistic tennis professional. We never doubt the sincerity of your character’s chauvinism the way we do Bobby Riggs. You were such a good unequivocal bad guy in that.

I liked that movie a lot. I’m not sure if it’ll get all the attention it deserves, but I think it’ll last as a humanist story and a great ensemble of actors. The directors were looking to get in the grey areas, and not the black-and-white of the normal sports movie.