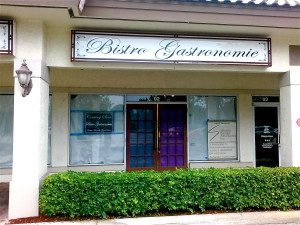 West Boca will get a its own serving of “modern American French country cuisine with a farm-to-table emphasis” when Bistro Gastronomie opens later this month in Yamato Village Center.

Chef-owner of the elegant eatery is William Walden, a 30-year vet of the dining game who comes to our little corner of paradise from the Goodstone Inn in Northern Virginia, where he earned quite a reputation for his “farm to fork” culinary ethos.

It all sounds interesting, but West Boca is a very tough market, as even a savvy local restaurateur like Dennis Max found out, so hungry Francophiles should keep their fingers and toes crossed that Bistro Gastronomie has some staying power.