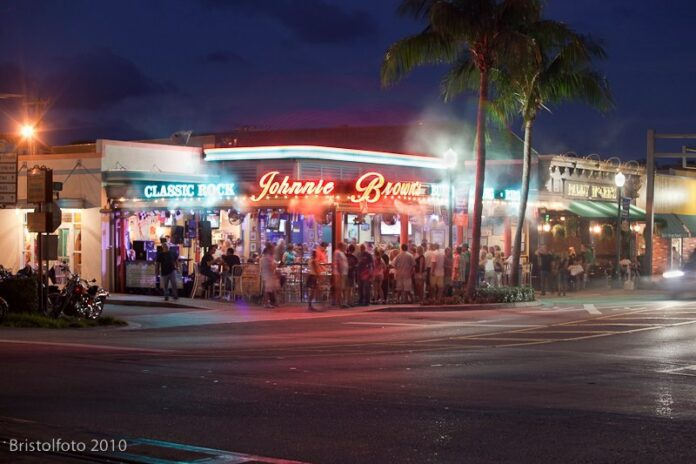 The lowdown: Guests of Downtown Delray can get their fill of classic rock and live entertainment at Johnnie Brown’s, an all-American burger, wings and rib joint located right along the train tracks.

Those train tracks play a big role in the history of this part of Delray Beach, so every time a train rolls by, there’s a special deal on drinks. This is just one of the many reasons why locals love the laid-back, rocker vibe at Johnnie Brown’s. Everyone is in jeans, baseball caps, and band T-shirts.

Johnnie Brown’s is an open-air bar, making it very Florida-friendly, but it’s covered, of course, because Florida loves to surprise us with rain. It’s an elbow-to-elbow kind of place, with people sitting and standing absolutely anywhere they can find to get a good view of whatever band is playing at the time. With such an energetic essence coming from the place, its no wonder people walking by stop and peer in to see what they’re missing.

The clientele is made up of a mostly older crowd — people who know and love the music playing on stage. There’s classic rock seven nights a week, including the Elvis Experience on Mondays with award-winning entertainer Scott Ringersen and a Rod Stewart tribute every Tuesday with The Hot Rod Band, a local Stewart tribute band.
The intangibles: Music starts about between 7:30 and 9 p.m. depending on the night. It’s the perfect place to go for drinks after you’ve enjoyed a nice early dinner on the Ave. The place packs up quickly, and there’s never a cover charge.

Happy Hour is Monday through Friday from 4 to 7 p.m. with $2 domestic draft beers and bottles, $3 imports and craft draft and bottles, $3 well drinks and $2 off all other drinks and wine. There are also “Shotski” specials — four shots for the price of three.

Hours: Johnnie Brown’s is open from Monday through Sunday from 11 a.m.

For more on bars in Boca Raton, click here.

Shaina is a Boca transplant, born and raised in South Jersey. Her love of writing began at a young age and followed her through to Rutgers University where she graduated with a degree in Journalism and Media Studies. It wasn’t until she sought after a new and exciting journey far away from the cold winters of Jersey that she discovered another love: food. Shaina created her very own food blog, Take A Bite Out of Boca, and has since grown her passion for cooking, baking, and of course sipping and savoring her way around town. She is very excited to be part of the team at Boca Raton Magazine and hopes that you will join her every step of the way as she explores Boca After Dark. You can follow Shaina and all of her foodie adventures in and out of the kitchen at Take A Bite Out of Boca.
Share
Facebook
Twitter
Pinterest
Email
Previous article
The Week Ahead: Sept. 2 to 8
Next article
Thirty-seven Local Athletes Head to Ironman Florida