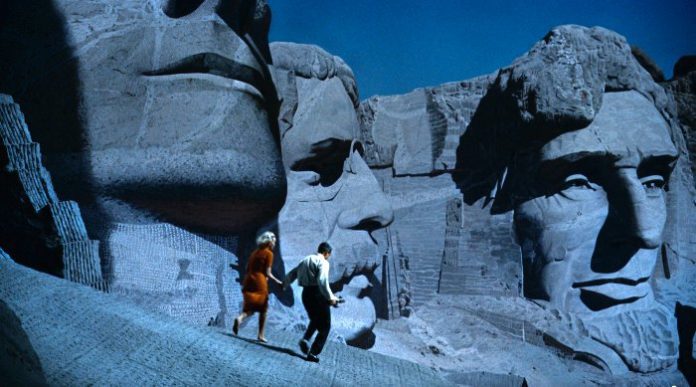 Boca Raton may be a long way from Keystone, South Dakota, but at least part of Mount Rushmore’s sweeping grandeur is on vivid display right here. A painted backdrop of mostly the Roosevelt and Lincoln portions of the granite sculpture welcomes visitors to the Boca Raton Museum of Art in all of its titanic, two-dimensional glory. Deployed by Alfred Hitchcock in “North By Northwest,” the 91-by-30-foot painting, as impressive from the museum’s second floor as it is the first, is the largest of the 22 backdrops constituting the museum’s “Art of the Hollywood Backdrop” exhibition, an extraordinary tribute to a fading art form.

Created by mostly anonymous craftsmen working in shifts for 24 hours a day, paintings like this were designed to deceive the eye, effectively providing filmmakers and audiences with the illusion of reality. Viewing them up close, detached from the kinetic storytelling that originally served them (and vice versa), movie and art lovers alike are free to marvel at their standalone beauty and verisimilitude—the intricate shading and rich details, the folds and ripples rendered invisible by the camera.

Co-curated by Thomas A. Walsh and Karen L. Maness, “The Art of the Hollywood Backdrop” features work saved by the Art Directors Guild Backdrop Recovery Project, a two-year effort that preserved more than 200 MGM and Fox backdrops that were bound for a studio dumpster. For the Boca Raton premiere, the curators structured the highlights into themed galleries such as “European Tour,” “Elegant Interiors” and “Illuminated Icons.”

A handful will look familiar to classic film buffs, from the sprawling ancient Roman cityscape of “Ben-Hur” to two backdrops from “The Sound of Music.” In one, a view from the Von Trapp family’s balcony offers a money shot of a serene lake and, beyond that, the mountains of Vienna, framed by horsehead pillars. The backdrop of a Pentagon hallway, used in rolling meta fashion in “Singin’ in the Rain,” is included here, too—along with an interactive sofa and life-size dummy, so fans can indulge their inner Donald O’Connor.

Other backdrops accompanied less famous movies—for others, their cinematic provenance is unknown, and may well have been recycled in numerous MGM productions—but the paintings are no less enrapturing. These include a rustic, snow-blanketed log cabin from “North to Alaska” and a luxurious hotel interior for “Weekend at the Waldorf.”

These are, reportedly, the largest paintings ever created in the world. Following “Machu Picchu and the Golden Empires of Peru,” it’s the museum’s second consecutive blockbuster show; like its predecessor, it is enhanced by video clips and a curated soundtrack, in this case movie music that creates additional ambience.

For cinephiles, the fun doesn’t stop here. In Palm Beach photographer Bonnie Lautenberg’s “Art Meets Hollywood,” the artist marries stills from classic and contemporary films with visual artworks completed the same year, divining intuitive, sometimes subliminal connections between the two mediums. In her words, she looks for images that “speak to each other.”

Sometimes the results are literal, other times abstract. The connections are often witty but are invariably imaginative and carefully considered. A Jackson Pollock painting, in all its controlled frenzy, makes for a deft correlative to the exuberant dancing of Gene Kelly and Leslie Caron in “An American in Paris.” To pair with Lauren Bacall in “Dark Passage,” Lautenberg discovered an eerily mirrored vision by Diego Rivera (“Portrait of Linda Christian.”) For a still of “Cleopatra,” Lautenberg selected Wayne Thiebaud’s “Hors d’oeuvres,” a work that, like the queen’s lifestyle, suggests comfort and excess distilled.

“Singin’ in the Rain,” featuring Kelly’s iconic, rain-swept “pole” dance, beautifully abuts the bold blue ribbons of Yoyoi Katsuma’s stirring “The Sea.” In potentially my favorite piece, pictured below, an image of a prostrate Greta Garbo from “Grand Hotel,” her dress billowing around her, complements the blooming title object of Georgia O’Keeffe’s “Jimson Weed/White Flower No. 1.”

Lautenberg began the ongoing project in 2017, and includes titles as recent as “Hidden Figures” and “Ma Rainey’s Black Bottom.” By limiting the pairings only to works completed within the same year, Lautenberg’s series is beyond clever; it also captures a synergistic zeitgeist—conscious or unconscious—between artists and filmmakers. If we’re lucky, we’ll be gifted with a Lautenberg mash-up for every year motion pictures have existed.