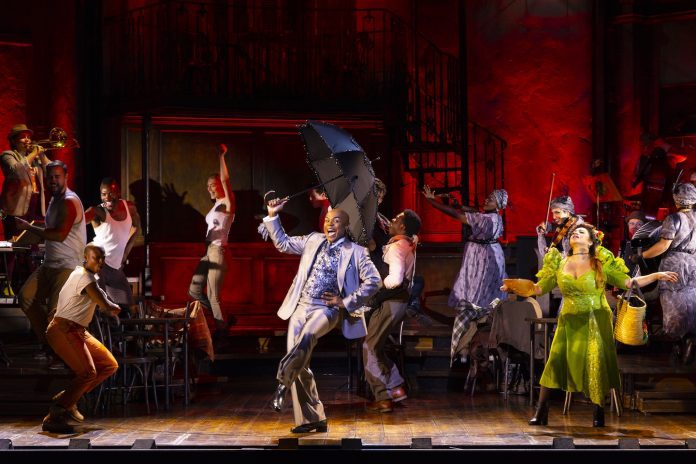 I arrived at last night’s opening night of the Broadway tour of “Hadestown” at the Kravis Center with a different expectation, I imagine, than most attendees. That’s because, at the risk of sounding like one of those pretentious boors who brags that, “I knew REM when they were playing tiny clubs in Athens,” etc., my affection for the songs of “Hadestown” long predated its successful Broadway bow in 2019 and the eight Tony Awards it would receive later that year.

I’ve been enjoying most of the music in “Hadestown” since the early 2010s, when the future show’s composer and lyricist, Anaïs Mitchell, released them as a concept album, sung by Mitchell and a cadre of alt-rock, alt-folk and alt-whatever royalty, including Ani DiFranco, baritone marvel Greg Brown and Bon Iver’s Justin Vernon. As an album, Hadestown, a folk-rock retelling of the Greek myth of Orpheus and Eurydice, certainly lacked the broad strokes and general bigness of musical theatre. Following its plot took second base to absorbing ones’ ears in Mitchell’s poetry. Even listening to its lyrics closely, the LP contained as much mystery as clarity.

Seeing Mitchell’s vision transferred to a proscenium at last night’s Palm Beach County premiere was a mixed bag: Its moments of beauty and some of eccentricities still resonate, but it remains dogged by a certain cerebral detachment—by a Broadway outsider’s chafing against the time-honored elements that make musical theatre so successful. It’s still an expression of folk poetry shoehorned into the quite literal world of song, dance and storytelling, and to fully immerse oneself in “Hadestown” is to transcend this squaring of circles. I couldn’t quite get there, though not for lack of trying.

Which isn’t to say that the show’s individual elements are not stellar in and of themselves. That Tony-winning score, beautifully performed by a seven-piece band—all but the drummer appear onstage, in themed costumes, flanking the action on either side—is an eclectic cocktail of gospel, jazz, blues and folk numbers, many of them lovingly fleshed out from their often-skeletal original forms. Supplemented by swinging lights, pseudo-kerosene lamps and miners’ helmets that scan the darkened auditorium like searchlights, this rendition of “Wait For Me,” for instance, is performed with the enormity of a Rihanna megahit, galvanizing the entire show.

The first-rate cast includes Nathan Lee Graham as Hermes, the show’s dapper narrator and guide to the underworld, who commands the stage and spirits forth the story with a cheeky zeal not unlike the Emcee in “Cabaret.” Chibueze Ihuoma lends an angelic tenor to his sensitive dreamer Orpheus, presented here as an aspiring singer-songwriter waiting tables in an economically battered city.

As the underworld king Hades, Matthew Patrick Quinn plays up the character’s autocratic politics to gripping effect, especially on Act 1 closer “Why We Build the Wall,” one of Mitchell’s greatest stand-alone lyrics, in which Quinn stands before a delegation of slaves like the demagogic Big Brother figure that he is.

Brit West provides a rowdy gutter-blues sensibility to Persephone, the original mythic snowbird who lives half the year with hubby Hades and the other half on Earth. West shines during her rousing Act II opener “Our Lady of the Underground,” a bit of comic relief when it’s most needed. Hannah Whitney makes for a capable Eurydice, though from our seats toward the back of the theater, I couldn’t discern much emotion or nuance in the performance.

So why, after everything the show gets right, is my overall reaction more tepid than I’d hoped? Its muddied ambitions are a start. For a show that was conceived as a cautionary tale about climate change, that supposed subtext flew over my head like the “Songbird” in Mitchell’s tune of the same name. Even Hades’ iconic building of the wall—to block out the poverty of … the world above? The exurbs of Hadestown?—isn’t properly elucidated for its full emotional impact. Why is a wall needed when the “overworld” is a lengthy train ride from his kingdom of Hell?

And if, god forbid, you miss a couple of lines of certain songs as the vocals become swallowed in the audio mix—and you will—good luck following each development with the kind of specificity that a sung-through musical demands.

The show also suffers from sluggish pacing, especially as it wends toward the moment we’re all anticipating: Orpheus’ terminal gaze toward his beloved, thereby consigning her to eternal damnation. For minutes on end, it seems, the doomed lovers walk in circles around a moving floor panel, which I fear is a metaphor for a padded production spinning its wheels in order to reach an unnecessary two-hour- and-40-minute running time.

It’s probably sacrilegious to say this about a show that won Best Musical at the Tonys and has won the praise of some 96 percent of theatre critics, but I can’t help but feel that the comfort zone of “Hadestown” is the audio imaginarium of Mitchell’s original LP, where the only stage is the theater of the mind.