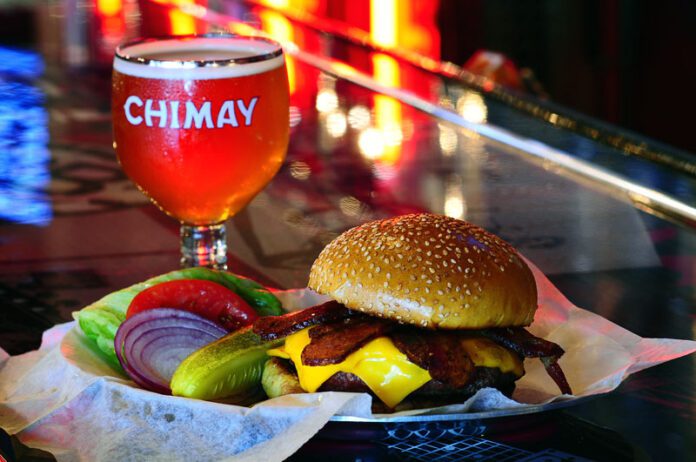 Like caviar and blini, steak and eggs, and lobster and drawn butter, a burger and a beer is a culinary match made, if not in heaven, in most of our bellies.

And come spring of next year, one of Miami’s premier purveyors of thick, juicy burgers and cold, frothy beers will be dishing and pouring in CityPlace. That would be Burger & Beer Joint, which opened its first outlet in South Beach in 2009 and is now in the midst of an aggressive expansion campaign that will see the debut of more joints in central and South Florida over the next year or so and up to 50 in the next several years.

The chain is known for its half-pound certified Angus beef burgers, which come in a variety of guises, from the Hotel California (guacamole, grilled onion, jalapeno relish, cilantro sour cream, cheddar and a sunny-side up egg) to the Stairway to Heaven (half-pound Wagyu beef patty with pan-seared foie gras and black truffle aioli).

There’s also the monster Motherburger, a 10-pound behemoth that sells for $125 and defeated even the elastic stomach and cast iron intestinal tract of Adam Richman of “Man vs. Food” fame. You can also customize your own beef, bison, turkey, chicken, veggie and tuna patties with an array of garnishes, extra proteins and sauces.

Along with an extensive selection of craft beers, there’s a roster of “adult shakes” that combine dessert with a serious buzz, like the fetchingly named Spank the Monkey, which blends rocky road ice cream, fresh banana, Pinnacle cake vodka and creme de banana. No word if it makes hair grow on your palms.