Come for the Comedy, Stay for the Discomfort 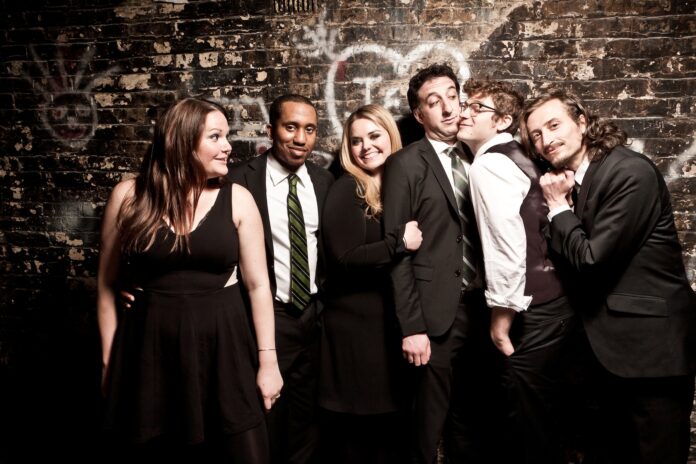 (not the same Kravis Center cast of the Second City)

It only takes a few minutes watching the touring cast of the Second City—the legendary Chicago comedy incubator, which plays at the Kravis Center through Sunday—to realize that you’re not watching comedians so much as talented actors who can adapt to a situation and steer it in unforeseen directions. A goodly amount of its show last night, in the Kravis’ Rinker Playhouse, was frankly not funny, but I don’t think it was supposed to be. The sketches contained expressions of anxiety, insecurity, awkwardness, loneliness and depression, sold by a cast who could, one imagines, perform an intense drama as deftly as a comedy show. Sometimes, minutes would be go by without a laugh, and while some may see this as a flaw, I saw it as a troupe of performers freed from the tyranny of sitcom patter, where there must be a laugh 15 to 30 seconds, even if the situation wouldn’t organically contain one.

The six-member team performed for a generous 2 hours and 10 minutes (with one intermission), and it all flowed together beautifully. The actors revived proven sketches from Second City’s 50-plus year archive, combining them with improv bits and interstitial, minute-long sketches connecting the lengthier set pieces. Every show will be different, though the pre-written material will likely be the same.

I could have done without the silly slapstick of a sketch involving lascivious senior citizens and guards armed with Nyquil dart guns, and a classroom sketch saved for the end of the show failed to resonate very much on a comedic or dramatic level. But the best of the sketches married comic inspiration with disquieting tension and/or sociopolitical awareness. A straight man doesn’t quite know how to handle his gay brother’s homecoming date. A psychic medium cold-reads a few of the show’s front-row patrons, hilariously satirizing a profession that’s ripe for parody. There was an excellent pair of routines about lonely men signing up for a creepy Internet friend service that brings to mind the technology-run-amok themes of “2001: A Space Odyssey” and “Her.” And a routine in which a man and a woman’s first date becomes a field of conversational landmines triggered by the mention of common words seemed awfully familiar, but it’s stood the test of time.

But, as is often the case, the funniest material came out of the improvised sketches, further proof that with the right cast, immediate inspiration yields more comic gold than sticking to a script. One of the actors asked the audience to “say anything at all.” He took the suggestion of the word “squirrel,” and inserted it, riotously, into a sketch about an art class for special-needs children. Later, the cast brought a volunteer onto the stage for a skit about a prom-night flashback, and despite the audience member’s comic dissonance—she broke the improv-comedy rule of always saying yes—the team made it work, playing her intransigence into their material. Besides, if this performance taught us anything about a comedy show, it’s that OK to make us feel uncomfortable every once in a while.