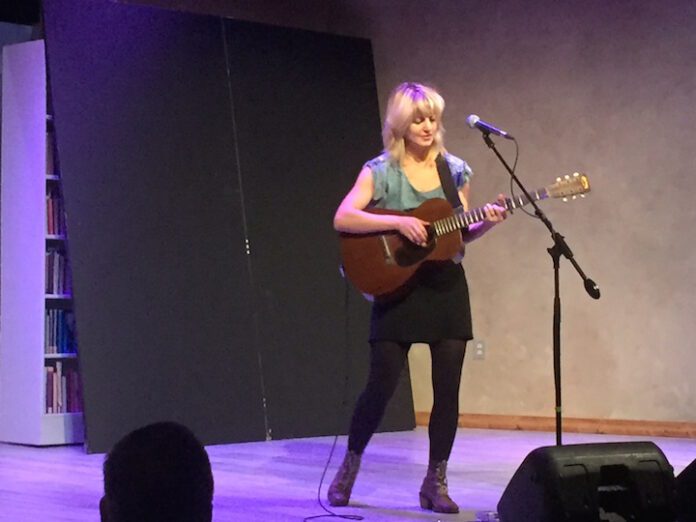 [Editor’s note: The Week Ahead will run later this week.]

Hurricane Patricia may have mostly spared the United States this past weekend, but inclement weather raged through the music of Anais Mitchell’s poignant acoustic set at Arts Garage Saturday night.

The Vermont folksinger writes earthen music, wherein nature is a force of fear, reckoning and respect. Ominous rainstorms, roiling rivers, irrepressible hurricanes and mercurial gusts of wind appeared in her poetic ballads on Saturday, and they mostly got the better of her protagonists, the poor souls forced to share real estate with them on this little blue dot. It was only fitting she closed her performance with a superlative rendition of Bob Dylan’s “A Hard Rain’s A-Gonna Fall,” with its symbolism of social injustice filtered through the imagery of apocalyptic rainfall.

If the subjects of Mitchell’s songs tended toward the lonely, woebegone and oppressed, the singer-songwriter herself was in high spirits, thrilled to be performing in South Florida for the first time. She announced that she turned her four-show Florida sojourn into a family vacation, bringing along her husband and 2-year-old—they’d just seen the Everglades earlier that day—and she thanked the small but captivated audience for coming to hear folk music on a Saturday night when “there’s so many other things you could have done.”

Mitchell acknowledged the uniqueness of her venue for the night, stating early in her set that “it seems like a lot of wonderful things are happening at this Garage.” One of them, Arts Garage’s theater series, was visibly evident: The stage was half-set for “Sex With Strangers,” the steamy play that opens this weekend, and Mitchell joked about seeing the backstage box marked “Costumes for Sex With Strangers” without being aware of a play bearing that title.

But mostly, the chatty songstress’ between-song banter illuminated her affecting story-songs by providing vital backstory and surprising trivia: The tragic “Shepherd” is a ballad form based on a book her father wrote; the brilliant “Tailor” started as a song about oil, not personal relationships, and was inspired by a viewing of “There Will Be Blood.” She wrote “Anyway You Come” for Bonnie Raitt, hoping the blues goddess would record the song and “send my daughter to college,” but so far, no dice.

As a singer, Mitchell possesses the kind of tone that would turn four chairs on “The Voice,” not because of its stratospheric range but because of its ethereal Northeastern distinction, so perfectly suited to the Irish-rooted chamber ballads in which she excels. It’s a voice that conveys quiet power and pointed commentary alike, as apparent on tracks ranging from the vintage folk protest of “Why We Build the Wall” (a sonic arrow through Donald Trump’s immigration “policy”) to the boozy barn-burner “Our Lady of the Underground,” which lost none of its brassiness in its minimalist acoustic form.

While filling just over half the Arts Garage seats (if that), the audience was as respectful as any I’ve encountered anywhere, creating a blanket of silence on which Mitchell’s clear, pointed songs lay. She rewarded us in the looser second set of the evening, taking audience requests and playing a whopping four of them—including songs, like “Shenandoah” and “Ships,” that rarely appear on her sets.

True folk music will probably never again fill spaces much larger than Arts Garage, but with an audience as intimate, passionate and mighty as this weekend’s, it doesn’t get much better than this.