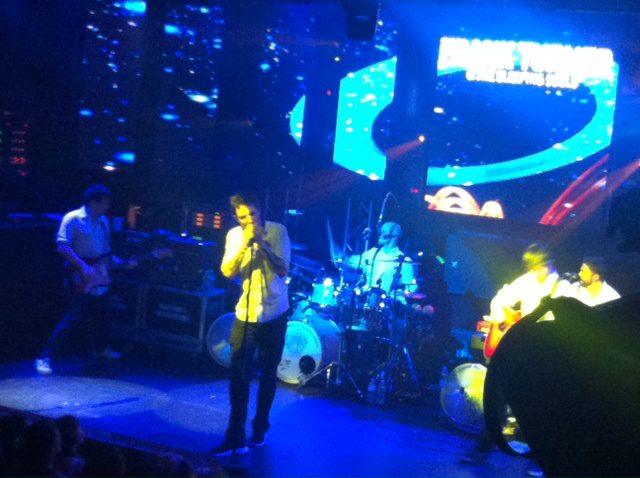 Midway through his performance of “Wessex Boy” at the Culture Room last night, English troubadour Frank Turner followed his usual script this tour, stopping the song to teach the crowd to sing in unison to the simple backing vocals “Ba-ba-baaa, da-da-daaa.” The gesture came off as especially unnecessary considering this crowd seemed to know Turner’s music better than he did. Just a fcouple songs earlier, on the indie-pop ditty “Reasons Not to Be an Idiot,” Turner had a brain fart, forgetting the chorus for a moment; the crowd belted through the entire thing, assuming he was handing it over to them.

That was the vibe last night: a communal campfire of the like-minded, with Turner’s attentive acolytes shouting his word with love, joy and therapeutic gusto. The place was immovably packed, too. Recent shows I’ve reviewed here have been well attended, but this was what a sold-out Culture Room concert really looked like. And the sound was as flawless as I’ve ever heard it in this venue.

One noticeable difference from Turner’s previous tour was the absence of an acoustic guitar slung over the singer’s shoulder. He explained this discrepancy a few songs in, reporting that he blew out his back, lifting up his shirt to reveal a medical brace, and comparing his “costume” to something out of “The Rocky Horror Picture Show.” He (mostly) followed his doc’s advice not to play guitar, lest it exacerbate his injury, and it’s safe to say we didn’t miss it: Turner is a charismatic frontman with or without an instrument – hopping, skipping, jumping, dancing, playing to the crowd, and exhibiting the thrill of a 9-year-old at Christmas every time he brought out his harmonica, wailing away on solos during “I Still Believe” and “Dan.”

The set list was a rollicking journey through Turner’s many moods and genres, starting roughly with catchy punk-pop that gave way to heartfelt ballads, country-blues and complex rockers. There were four or five times when I felt like a song must be the set closer – “Peggy Sang the Blues,” “I Am Disappeared,” “I Knew Prufrock Before He Got Famous,” the crushingly loud “One Foot Before the Other” – and still the show went gloriously on, concluding with the thunderous drum booms of “Broken Piano,” a song that self-actualizes best in a live setting.

In the encore, we got a lovely acoustic cover of Tom Petty’s “American Girl” and, finally, with the long-awaited “Four Simple Worlds,” aka Turner’s “Bohemian Rhapsody,” a song that encapsulates his every musical whim into five minutes. A tribute to punk-rock shows of yore, it was the only point in the night that a mosh pit broke out on the floor, and this, too, felt like a statement of love and camaraderie, the perfect end to a perfect show.