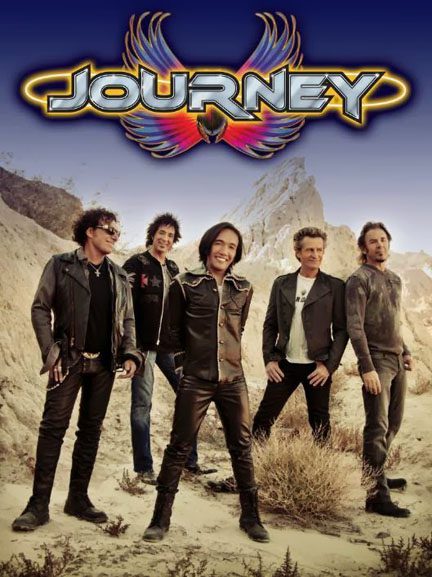 Perhaps no band in rock history has ridden the wave of one song’s repeated and unexpected splash into the cultural mainstream any better than Journey.

As evidenced by the overflow crowd standing as one and in full throat during the band’s performance of it Sunday night at Coral Sky Amphitheater, “Don’t Stop Believin’” has moved beyond a simple audience-pleasing set-closer. It’s officially an anthem for the ages, one that, for different reasons, resonates with everyone from Baby Boomers to generations X, Y and Z.

All of which must drive Rolling Stone absolutely crazy.

This is the same song that, upon its release in 1981, a reviewer for the magazine wrote, “Lord knows how many weary pilgrims have managed to tramp down the memory lane of adolescent lust without the side trip that Journey [makes] to the dank hole of dreck-ola … addressing [its] audience as ‘streetlight people.’” Another Rolling Stone writer once referred to the Bay Area band’s music as “Stepford Wives rock.”

OK. So Journey may never be a critical darling. But what does that matter when you’re the people’s choice? Can the estimated 18,000 in attendance at Coral Sky for Sunday’s show with Steve Miller Band really be that wrong?

For the record, I bring a bit of bias to the discussion. Journey was my first concert, back in the general admission days of 1980, and I’ve been a fan ever since. My friend and I that night had maneuvered our way next to the stage at Lee County Arena in Fort Myers. Just as guitarist Neal Schon tore into the first notes of “Any Way You Want It” (which Journey opened with at Coral Sky), the third member of our party passed out. Unbeknown to us, he had ingested an illegal substance of some kind—which, combined with the wall of sound, caused him to black out. We dragged him into the bathroom (he survived), and reclaimed our prime position.

Journey killed it that night—and 35 years later, they’re still killing it. Along the way, the band has cycled through its share of players, including, at one point, future “American Idol” judge Randy Jackson on bass. The current incarnation includes three members from the heyday of the band’s commercial success—Schon, keyboardist Jonathan Cain and bassist Ross Valory—as well as drummer Dean Castronovo, who turned in one of the show’s highlights with his take on “Still They Ride.”

But it’s lead singer Arnel Pineda, who, in his own way, has helped to write the most recent chapter in a history that dates back to 1973, when Journey was positioning itself as a jazz fusion group in San Francisco. The diminutive Filipino front man not only does justice to the songs made famous by Steve Perry—one of the more unmistakable rock voices of the last four decades—but he has a story straight out of the Mark Wahlberg movie “Rock Star.” Schon discovered Pineda on YouTube performing Journey songs with a cover band—and hired him in 2007.

On stage, Pineda couldn’t be more different than Perry, who relied more on the strength of his dynamic vocals than his personality. Pineda, on the other hand, is like a human pinball, zigzagging between band members and jumping off platforms. For Schon and Cain, who are in their 60s, the energy must be contagious. Schon, who never met a guitar solo he didn’t like, squeezed two of them into an abbreviated set; Cain, sporting some serious porkchop sideburns, turned in a keyboard solo and handled some guitar work at times. Both men brought as much enthusiasm to songs like “Separate Ways” and “Wheel in the Sky” as they did during their stadium-headlining days of the early ’80s.

Pineda brought the house down with a powerful rendition of the 1983 hit “Faithfully,” which preceded the song that everybody had come to hear. What makes the rise of “Don’t Stop Believin’” even more remarkable is that it wasn’t even the biggest hit off the 1981 album “Escape.” That distinction belonged to “Open Arms,” which became Journey’s highest-charting single on Billboard’s Top 100 at No. 2 (“Don’t’ Stop” only reached No. 9.)

But then, more than two decades after its release, a funny thing happened to “Don’t Stop Believin’.” It started showing up—everywhere. The Chicago White Sox adopted it in 2005 during their playoff run. “The Sopranos” made it the soundtrack of the series’ famous final scene. “Rock of Ages” brought it to Broadway. Rock Band brought it to video gamers. The TV show “Glee” performed it multiple times.

Suddenly, “Don’t Stop Believin’” was having a second act like no song in recent history—and maybe ever. It became one of the most downloaded songs since iTunes debuted, selling more than 6 million units in the U.S. alone.

On Sunday, Pineda got the song started, and the crowd took it from there. And so it goes for a band that could have wound up a guilty pleasure—but instead, for many people, has become a national treasure.

Any Way You Want It

Be Good To Yourself

Wheel in the Sky