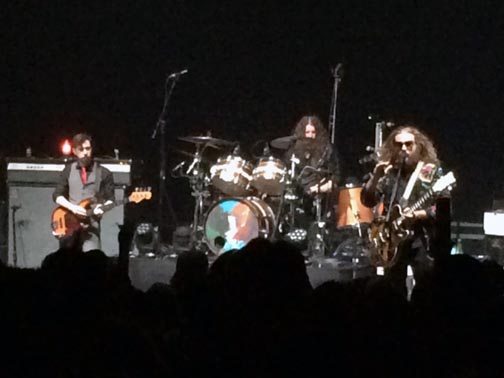 All of which proved the perfect psychedelic backdrop for My Morning Jacket and its equally trippy and wild-haired front man, Jim James, who took the stage in his trademark bushy facial growth, sunglasses and Technicolor dream coat. To the untrained rock eye, it might have appeared as if James was channeling the bearded and blottoed version of The Doors’ Jim Morrison.

But the difference between that version of Morrison and My Morning Jacket’s prodigiously talented singer/songwriter is that one came to an auditorium ready to pass out. James and the equally accomplished members of MMJ—Tom Blakenship (bass), Patrick Hallahan (drums), Carl Broemel (guitar) and Bo Koster (keyboards)—came to play.

And did they ever Monday night.

Starting with the rousing and rollicking blast-off of “Circuital,” My Morning Jacket sank its hooks and riffs into the crowd and took them on a mid-summer rock ride that easily qualifies as one of the concerts of the year in South Florida. Supporting its first album in four years, the exceptional “The Waterfall,” the band took the stage just before 10 p.m. and held the Fillmore in its grasp until 10 past midnight, with several of the evening’s 21 songs bleeding into the next.

It wasn’t until the eighth song of the set, “Like A River” (off the new album), that James even acknowledged the crowd with a hello. His interaction with those fans closest to the stage consisted of touching fingertips, which, without knowing the back story, could be a signature move or a Howie Mandel-like aversion to germs. Not that it mattered either way.

No one comes to a My Morning Jacket show to hear James pontificate. They come for the experience—a rich, borderline-spiritual musical journey filled with lush harmonies, ethereal guitar work, pulse-pounding power jams and, on songs like “Victory Dance” and “Touch Me I’m Going to Scream Part II,” James’ haunting, uplifting howls.

Midway through the first set, the band eased into “They Ran,” off its debut album (“Tennessee Fire”), building a hypnotic wall of sound that spilled into “Steam Engine,” from the album “It Still Moves.” At one point in the 15-minute stretch, with Broemel conjuring one aching riff after another and Hallahan laying down an entrancing beat, the entire general admission section was swaying in unison.

The quintet would finally break the spell with the crowd-pleasing “Off the Record,” followed by the down-and-dirty “Tropics” off the new album, a bluesy romp that would have made John Lee Hooker proud.

Unlike bands who similarly attempt to slide in and out of songs that are contemplative one second, anthemic the next, My Morning Jacket delivers its seamless ebbs and flows with such a warm embrace. It’s music that, played live, invites you to bask in its glow. Countless times throughout the night—like in the set-closing “Mahgeetah” (from “It Still Moves”)—the band worked itself into grooves so pure, so irresistible, that you never wanted them to end.

When James and company finally shut it down after a roof-raising version of “Gideon” that capped a relentless two-hour, 15-minute performance, the electrified crowd was still buzzing. Many stayed behind, hanging near the stage in the hopes of landing a loose guitar pick or a set list—a little keepsake from a throwback night that those who attended will not soon forget.

In Its Infancy (The Waterfall)

Spring (Among the Living)