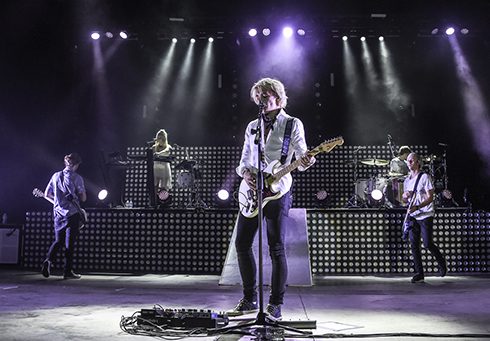 A cool breeze, a great band and feel-good music are the ingredients for a perfect summer night. And that is exactly how Wednesday night felt when R5 came to Boca Raton.

For the second stop on its world tour to promote the new album “Sometime Last Night,” R5 took over Mizner Park’s Count de Hoernle Amphitheater and put on a show full of energy from start to finish.

Ryland Lynch, the one Lynch sibling not in R5, took on the role of DJ and kicked off the night. Lynch is just as much of a star as his rocker siblings and endured the excited screams from young girls throughout his set. When he was finished, Lynch came into the audience and worked the light board for the rest of the night.

Vine star Jacob Whitesides performed second, with a seven-song set that had fans cheering. Previously unfamiliar with Whitesides, I was impressed with his vocal ability and acoustic guitar prowess. When he performed his new song “Shame On You,” everyone in the audience already knew the words. It is clear that Whitesides is a name that you should remember.

After a quick set change, R5 took the stage. The screams of girls all in their teenage years or younger filled the amphitheater when siblings Riker, Rocky, Rydel and Ross Lynch and family friend Ellington Ratliff appeared from behind a white curtain. Even though R5’s songs contain messages that are a bit PG-13 at times, children in the audience loved them all the same.

The band, as one would imagine, has an abundance of chemistry and frequently joked around with each other throughout the night. Ross gushed about the relationship that Rydel and Ratliff had entered before covering Lady Gaga’s “You and I,” which he dedicated to the couple. Rocky brought onstage a plastic palm tree that he bought on Amazon to take in the Florida experience, Riker joshed Ross when his shoe came untied, and no one was safe once the water guns came out.

While also playing songs from its first album, “Louder,” R5’s main focus was to introduce audiences to “Sometime Last Night,” which will be released on July 10. The band rocked out to its new songs—most of which the members wrote themselves.

Ross, who is famous for his roles on Disney Channel’s “Austin & Ally” and “Teen Beach Movie,” took most of the lead vocals, though all of his siblings received their share of time in front of the microphone.

One of the highlights of the night was when Rydel, the sole woman of the band, took the lead on “Lightning Strikes.” She brought girl power to the stage and showed that she could rock just as hard as any of the men who were onstage with her.

Another highlight was “Did You Have Your Fun?,” which Riker previously toldBoca magazine was the song he was most excited to perform on tour.

After the show was over, the band kept the party going at an album release party at Town Center Mall’s Blue Martini, where they celebrated the upcoming release of their album. Ryland took his place as the DJ for the club and the rest of the band had fun dancing and mingling with fans.

Do not let the young fans fool you; R5 is not just for kids. Its sound is a high-energy blend of rock and pop, and while the band is still under the radar, its new album will be tearing up the charts soon. Be on the lookout when R5 comes back to Florida for two more stops in February.

Not My Type at All

Heart Made Up On You

Let’s Not Be Alone Tonight

Things Are Looking Up

I Know You Got Away

You and I (Lady Gaga Cover)

If I Can’t Be With You

Did You Have Your Fun?

I Can’t (Forget About You)

Kevin Studer is a graduate student at Lynn University studying Communication and Media, who is interning at Boca Magazine this summer. When not in the presence of awesome journalism opportunities, he has a passion for all things Disney and Broadway. You can reach Kevin at kstuder@email.lynn.edu.