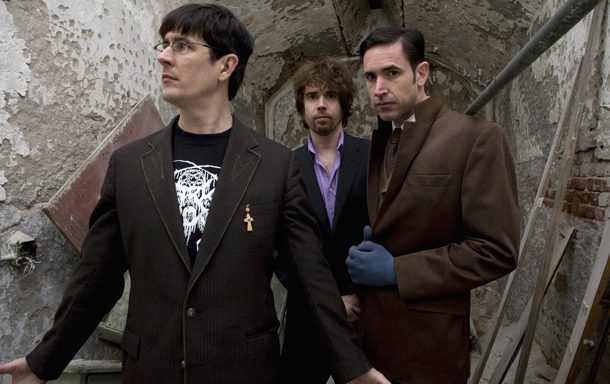 When The Mountain Goats played the Culture Room in 2013, it was the first time they’d ever visited South Florida (not counting a cruise gig departing from Miami). Last night’s valiant return, part of a Southeastern leg supporting the wrestling-themed masterwork “Beat the Champ,” seemed less attended than the earlier show, owing perhaps to the torrential downpour. But it once again validated the eager audience that has been here for probably decades, and introduced local fans to the precise three-act structure that most Mountain Goats tours inevitably follow.

Flanked by the grizzly and gifted multi-instrumentalist Matthew Douglas and longtime bassist Peter Hughes, with drummer Jon Wurster at his perch in the back, singer-songwriter John Darnielle entered with an ironic T-shirt (“I hope you suffer,” in death-metal typeface), jeans of an indeterminate red, and a tan blazer, the most underdressed of his band. Imbibing a local craft beer (Funky Buddha!), Darnielle was characteristically loquacious and in great spirits, despite the set’s few hiccups: Hughes couldn’t get his bass up and running during the the opener, “The Ballad of Bull Ramos;” Darnielle forgot the lyrics to the bridge of “Foreign Object;” and the bridge of “Southwestern Territory” likewise proved problematic, with an audience member mercilessly recording the flub on his phone for posterity.

But who’s counting when we’re all among friends? This was a crowd that would forgive anything, and we were repaid with a satisfyingly eclectic set that showcased rock ‘n’ roll barnburners, spartan piano ballads and even a front-porch jamboree-style cover of Little Feat’s “Willin’.”

Acknowledging the crowd’s appreciative response to the jangly bliss of “Animal Mask,” Darnielle said that “When you get ‘woos’ for something off the new record, it’s very welcoming.” And it spoke louder than some of the more tepid critics’ reviews of “Beat the Champ,” an album that manages to find not only the surface humor in professional wrestling but also the unexpected poetry and concealed melancholy. It helps that the songs sound even stronger live than on record; the thunderclap urgency of “Stabbed to Death Outside San Juan” was as intensely performed as any Mountain Goats song I’ve ever heard live, a harrowing amalgam of spoken-word narrative, pounding drums, and Douglas’ complex saxophone chords, played like a guitar.

I’m sure I wasn’t alone in savoring the few older songs sprinkled among the set. One of the most pleasurable highlights arrived early in “Yoga,” which die-hards recognized from the vinyl-only EP “Devil in the Shortwave,” invigoratingly reimagined for a full-band arrangement. The second act of the aforementioned three-act set structure featured Darnielle alone, performing a pair of cuts from “The Coroners Gambit:” the exuberant, shout-along classic “The Alphonse Mambo” and the lovely pre-dawn snapshot “There Will Be No Divorce.” “Ezekiel 7 and the Permanent Efficacy of Grace,” played on solo piano, was haunting and pained, supplemented by back-of-the-stage video suggesting the twinkling stars of endless night. The biggest surprise—thanks to an audience suggestion—was “From TG&Y,” one of Darnielle’s unreleased tributes to frustrated youth, a depressing poem played and received like a empowering anthem.

All the songs that can justifiably be called hits clustered at the end of the set. “Damn These Vampires” has never sounded better to my ears; after his galloping performance, Darnielle remarked, “That’s like my favorite one right now,” and you could tell. “Game Shows Touch Our Lives,” “This Year” and “Blood Capsules” continued their reign as winning, set-finishing staples. Darnielle sent us home with “Spent Gladiator 2,” an unlikely closer carried by his adopted persona as something like a preening lounge singer. Liberated of his guitar, he stood on the edge of the stage, knelt over his adoring fans and even told one, in song, to put her phone down. After all, no recording could do the moment justice.

By the way, it’s worth noting that Floridians with a penchant for the raw, stripped-down unpredictability of the early Mountain Goats shows can still experience one this fall. Darnielle will play a free, first-come-first-serve solo gig Nov. 5 in Sanibel Island, a two-and-a-half-hour drive that will be well worth it. Visit http://www.fgcu.edu/siwc for the details.

15. Stabbed to Death Outside San Juan