Concert Review: The War on Drugs at Fillmore Miami Beach 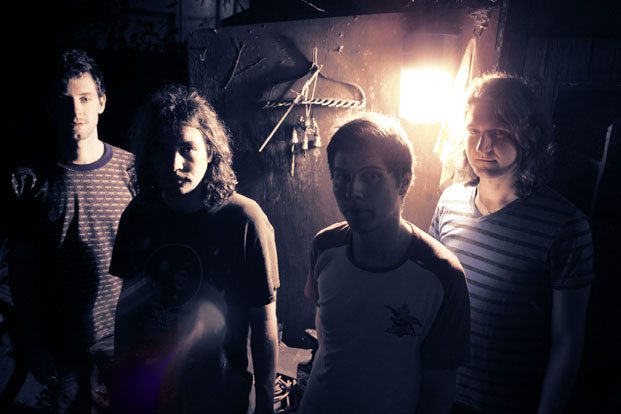 Midway through the set of the Everymen, the opening act for the War on Drugs’ summer tour, I must admit I was a little worried. The Fillmore at the Jackie Gleason Theater felt cavernously open, with few seats occupied and a smattering of fans huddled near the stage. Could this really be the turnout for the band that released what many believe to be the best album of 2014?

This turned out to be much ado about nothing. Once the lights dimmed at about 10 minutes after 9, and the band approached the stage backed by a mystical ambient overture, I was pleased as peach to see that I was standing in the midst of a packed and rabid house. Not only could the War on Drugs now fill a room the size of the Fillmore; they needed a stage like the Fillmore’s. Their appearance last night was a genuine production: Diffuse beams of light sliced through an atmospheric haze, while a series of identical abstract panels spread out behind the band like concave dominoes, shifting colors when appropriate.

Yet the group betrayed its humble, lower-fi origins in its workmanlike performance, which eschewed rock-star bombast. Ever the bedroom folkie, frontman Adam Granduciel performed with eyes closed and downcast, though he certainly seemed to be in a better emotional place than he was when he conceived last year’s breakthrough masterpiece “Lost in the Dream.” He didn’t say much, but this being his first Miami performance, he lauded the city by considering it “one of the nicest places in America, for sure.”

Visiting the Fillmore, it’s easy to agree with him. As usual, the venue’s sound mix was always solid and sometimes perfect, with nearly every instrument clear and identifiable. The saxophone seemed too buried to make out most of the time, but I’m sure I processed it on a subconscious level.

It should come as no surprise that selections from “Lost in the Dream” dominated the set list, including a run of seven tunes in a row. Influences of other bands, whether overt or incidental, could be heard live as much as on record; the rollicking rouser “Red Eyes” still sounds like a lost Arcade Fire song, and “Eyes to the Wind” sounds more like Bob Dylan than Bob Dylan does. But for me, that song was perhaps the show’s blissful apex, a height it shared with the delicate, twangy, beautiful title track of “Lost in the Dream.” “Under the Pressure” was another visceral knockout, a song that meandered toward a hypnotic void before jolting us back to consciousness, like a lion woken from slumber.

The War on Drugs has evolved considerably since its 2008 debut Wagonwheel Blues, a more ragged and witty album than the recent material, and Granduciel threw us a couple of bones from it, along with four from 2011’s “Slave Ambient.” The older songs, performed an ethereal sheen, sounded completely of a piece with the newer material, losing themselves in the dream.