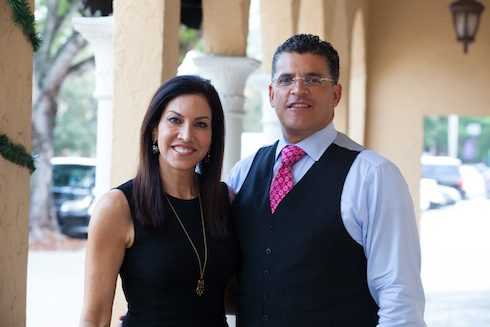 Yes. Fred Astaire really did start a dance studio. And yes, he started it with Jean-Marc Casanave’s grandfather, Charles Lawrence Casanave, in New York in 1946. Jean-Marc and his wife, Pam (pictured), have been running the Boca Raton offshoot of that historic studio in Boca Raton since 2004—and it’s time for a 10-year anniversary celebration.

The studio will host an open house Saturday, June 7, at 6 p.m. to commemorate 10 years of business in Boca and achieving top honors in the industry several years in a row.

That first studio Astaire and Casanave started was an immediate hit, spawned numerous franchises and became a family legacy. Jean-Marc and Pam were part owners in four franchises in North Carolina before they moved to Boca Raton in 2004, opening their present studio.

“I always wanted to be in the franchise business,” Jean-Marc says. “My uncles told me I had to learn the dance business too—dancing, taking part in competitions and showcases. I started in 1985—as a dance teacher. I grew up learning to dance.”

Today the sunny studio in Royal Palm Place in Boca Raton is one of the top studios in the nation and operates under what Pam calls a new generation of dance studio owners, with an emphasis on manners and attention to the customer dance experience. And that little TV show, “Dancing with the Stars,” didn’t hurt, either.

Although today’s studio is much more relaxed than the old days, the focus is on teaching someone how to dance—not one dance, not dance lessons, the Casanaves stress, but how to dance. And you can learn it all at the studio, from the six major dances—foxtrot, waltz, tango, rumba, swing and cha-cha—to some South Florida faves like salsa and samba.

Jean-Marc says the average person can get going after “a handful of lessons,” and the studio also encourages students to attend the group classes, held five times a week. They say most people walk in thinking they have two left feet and end up wondering why they waited so long to start dancing. And, in the process, the exercise pays off.

And on Saturday, June 7, this couple and their loyal staff and customers will applaud all of that at an open house and cocktail party that will, of course, include dancing.

We’ll see you there!