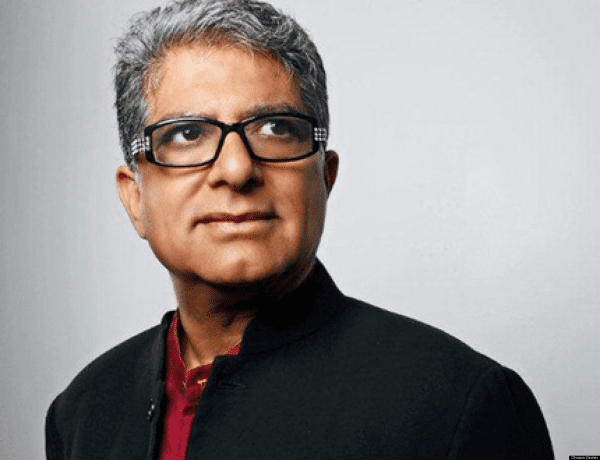 Last night, I was one of a whopping 1,600 attendees at Deepak Chopra’s speaking engagement at B’nai Israel in Boca Raton, one small pea in a lovely spiritual soup. It’s been less than a year since Chopra’s last South Florida appearance, but it didn’t stop this event from achieving a capacity swell. As a general-admission ticketholder, if I stood up and craned my neck, I could possibly make out the top of the soft-spoken thinker’s head; mostly, though, the Deepak Chopra we saw emanated from a video screen a hundred feet away.

But even at such a distance, he was utterly captivating, holding our attention, touching our souls and flexing our mental muscles for the better part of two hours (though in Boca, you can always count on a number of people deciding to beat the traffic, even when the speaker isn’t finished yet). He started out with big, fundamental, unanswerable questions about life and consciousness, joking “We have approximately two hours to figure out the nature of the universe.”

Chopra promptly dove into facts and figures about physics—the universe is 70 percent dark energy, 25 percent dark matter and 4 percent atomic energy, of which we are just .01 percent—poetically concluding that Earth is located “in the junkyard of infinity.” He then pivoted to studies of the biological basis of consciousness, which remains unsolved by science, referncing Arthur Eddison’s famous quote that “something unknown is doing we don’t know what.”

Indeed, science can’t answer the existential questions that cause Deepak Chopra to wake up every morning. And until it does, he seemed to say during the rest of his appearance, we should do our part to keep this little blue dot around by living healthy, spiritual, harmonious lives—to help the universe by helping ourselves, and by becoming one with the infinite consciousness.

Aided by PowerPoint slides, Chopra’s lecture soon took on the feel of a self-development workshop, titled “The Future of Well-Being,” and I was grateful to be taking notes. There were too many takeaways to list in one article, ranging from the bizarre to the practical to the moving: Tomatoes have more genes than humans; meditation increases our telomeres by 40 percent, thereby slowing cellular aging; 90 percent of our DNA is bacteria, so that we are really “microbial colonies with a few human cells hanging on to them.”

There were flow charts and bar graphs and mind maps about things like epigenetics, neuroplasticity, quantum entanglement and qualia science, yet despite the density of the material, Chopra kept everything explicable, leavening his speech with epigrammatic humor: “We spend money we don’t have on things we don’t need to impress people we don’t like.” “If you’re constantly planning for the future, when it comes your way you won’t be present for it.” I was especially fond of a pair of slams against GMOs, which he called “not even food,” to the uncomfortable murmers of some in the audience.

He ended his lecture with a 10-minute meditation, which lowered the collective blood pressure of the entire room and caused us all to be aware of our hearts beating through our fingertips. Actually, that wasn’t quite the end: He then proceeded to plug his new book, “The Future of God,” which is fine—cause hey, even enlightened gurus need to eat.

No doubt he sold a lot of paper at the book signing following his presentation; more importantly, though, he opened a lot of minds. After just two hours, I felt like I had audited an entire college course I probably wouldn’t have understood in college.

Chopra appeared at B’Nai Israel as part of the congreation’s BNI Talks speaker series, which continues tonight, Nov. 14, with progressive Ukrainian rabbi Alexander Dukhovny. There is no charge for this event. For more on the series, visit cbiboca.org/about/cbitalks