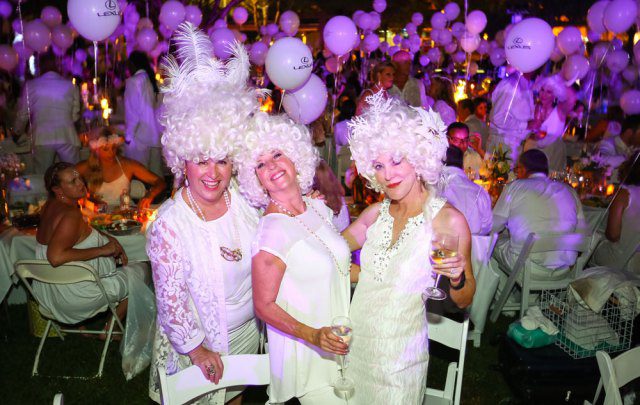 I feared the worst when the sky opened up about 30 minutes before the much-anticipated Diner en Blanc was slated to start. It started coming down in buckets and all I could visualize was 1,200 people dressed in white sopping wet—which is not a good look unless you are poolside in a wet T-shirt contest.

But all turned out Ok in typical South Florida style as the clouds moved offshore and the buses arrived and the West Palm waterfront started filling up with long white tables and revelers replete with white wigs and masks and feather boas and boaters and candelabra—if you could dream it up it was there—and it was spectacular.

Everyone knows by now that the first Diner En Blanc —or White Party—started in 1988 in Paris when a man named François Pasquier invited a few of his friends to the Bois de Boulogne one day in June on his return to France after being abroad. “To find each other in the park, they all wore white. The dinner was such a success that they decided the next year, each person would invite some other friends and the event grew organically into the 10000+ dinner it is today,” according to event sources.

There are rules now—like the location is a secret until guests board pre-arranged buses that take the invitees to the dinner spot.  You have to wear white, tables and dinnerware must be white, only champagne or wine may be consumed (no Tito’s at this event!) and you are expected to stay until a given hour.

This inaugural West Palm version was the work of Nora David, Jimmy Moise and Corhinn Brunot, of glamorous Haitian descent, and it was dazzling, very chic and full of live French music, beautiful people and a distinctly European vibe. There were glitches, of course, and some grumblings (traveling by bus was the most common complaint) but all in all, it was an impressive first attempt.

And destined to be a tradition, I think.