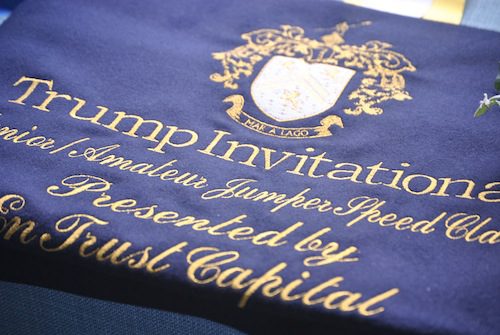 Thunder rumbled and rainstorms came sporadically. Still, riders mounted their horses at the Mar-A-Lago Club for the Trump Invitational Grand Prix, which raised more than $300,000 for local charities.

As they competed in a horse show jumping competition on Sunday, a fashionable crowd watched from under big white tents that kept the rain out, for the most part.

There were quite a few celebrity sightings, from Mar-A-Lago owner Donald Trump to BET co-founder Sheila Johnson to four-time Grammy nominee andcountry singer Hunter Hayes, who performed before the competition.

But it was Georgina Bloomberg, daughter of former New York City Mayor Michael Bloomberg and co-chair of the event, who stole the spotlight in her orange Alexander McQueen maxi dress. She looked stunning, and unbelievably so given she gave birth to her son, Jasper, just a couple of weeks prior.

(Left to right: Paige Bellissimo, Ivanka Trump and Georgina Bloomberg)Other event chairs include Ivanka Trump, who posed with her adorable daughter Arabella, and Paige Bellissimo, who walked daringly – and successfully – across the well-manicured lawns in a pair of pumps. Bellissimo and her father founded the 2014 FTI Consulting Great Charity Challenge, which distributed the money raised at the event among 34 local non-profit organizations.

Before the competition began, a foursome golf game with Donald Trump was auctioned off with a final price of $40,000. Two were sold, raising a total of $80,000 in just a few minutes.

This is the second Trump Invitational Grand Prix. Trump says he decided to repeat the event because last year’s was so successful and raised so much money.

Bloomberg, who also chaired last year’s event, says she was looking forward to coming back to see how it had grown and how many people would come out to support it.

Kent Farrington, last year’s winner, again claimed the No. 1 spot at the event, with Candice King following in second place and Todd Minikus in third.