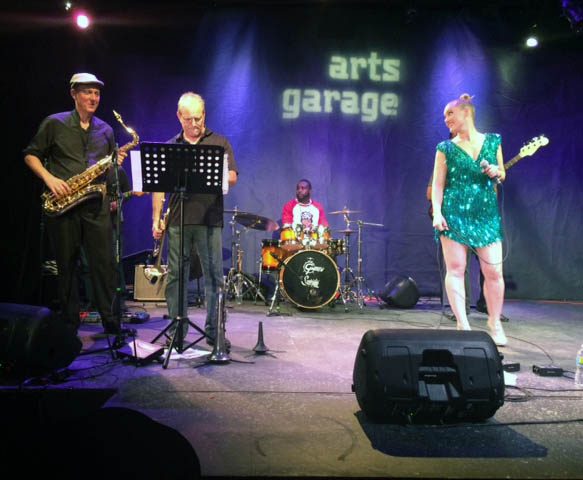 In the “fun facts” section of her online bio page, the president and CEO of Arts Garage jokes that she launched her first career at age 4 as a runway model but gave it up for the “best first-grade education the Soviets had to offer.” But don’t let Alyona Ushe fool you. The daughter of a famed Russian stage actress–not to mention a father who was a nuclear physicist–arrived in the United States at age 10 with more than just a Brezhnev merit badge to her name.

At the very least, Ushe was smart enough to understand that Delray Beach was ripe for an inspired addition to its cultural scene, something that couldn’t be easily pigeonholed but would consistently entertain. In the four-plus years since it opened, Arts Garage has given South Florida just that—and much more—from established jazz and blues artists and up-and-coming vocalists to live theater, art exhibits and educational workshops.

But the charms inherent to Arts Garage and its BYOB faithful extend beyond its eclectic offerings. Unlike shows at auditorium venues, the communal spirit isn’t limited to mutual appreciation of the artist. At the recent, rollicking blues performance by the Betty Fox Band (pictured above), whose lead singer had the crowd on its feet with her soulful, powerhouse vocals, table after table of regulars arrived early with coolers in hand. They set out their wine and cheese and crackers, they caught up with friends, they sampled one another’s side dishes. And they stayed after the show to compare notes and meet the band. The experience is so warm that you half-expect Ushe to invite attendees to stay for a sleepover.

If you haven’t already, check out one of the Garage’s upcoming shows. The October slate promises something for everyone: Former Spin Doctors lead singer Chris Barron is doing an acoustic show Oct. 9; Latin jazz artist Sofia Rei takes the stage Oct. 16; the Moscow Jazz Orchestra performs Oct. 18; and “Sex with Strangers,” destined to be one of the more talked-about theater shows of the year, opens in late October.

For the complete schedule and ticket information, visit artsgarage.org.