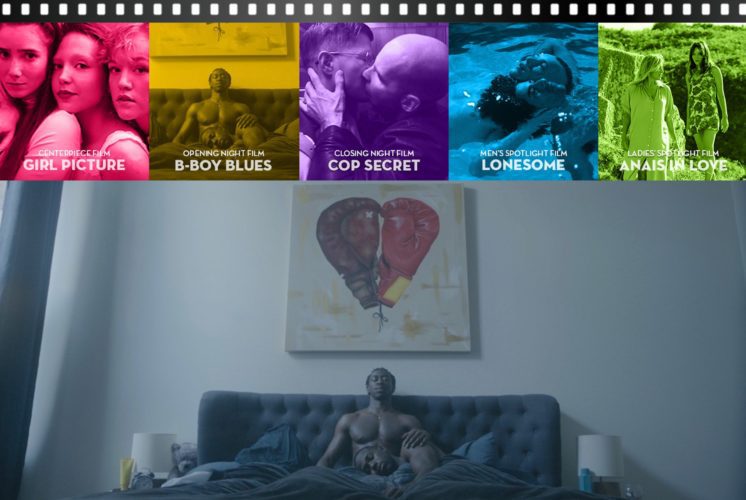 OUTshine LGBTQ+ Film Festival Miami, internationally acclaimed as one of the largest LGBTQ+ cultural festivals in the world, will open its 24th edition with the first Florida live screening of “B-Boy Blues” (2021) at The Black Archives Historic Lyric Theater on April 22 at 7 p.m. Producer Circle members and filmmakers will enjoy a 5:30 p.m. pre-event Filmmakers Soirée. The film will be followed by a live Q & A and an opening night party featuring cast from the film, filmmakers and Vanguard honoree Venezuelan actress, model, and philanthropist Patricia Velásquez.   “B-Boy Blues” USA (2021), is an African American romantic comedy-drama based on the 1994 groundbreaking, and beloved classic book by James Earl Hardy. Class and culture clash when Mitchell, a college-educated journalist from Brooklyn, and Raheim, a homeboy-bike messenger from Harlem, fall in love. Despite his friends’ misgivings and several red flags, Mitchell is enraptured by the incredibly sexy and smooth Raheim, but the repercussions of their mutual obsession will affect his work, friendships, and family. Described as “Moonlight” meets “Queer As Folk,” this unapologetic celebration of African American gay men will leave you wanting more. The film stars Timothy Richardson, Thomas Mackie, Brandee Evans, Landon G. Woodson, Ledisi and Heather B. “B-Boy Blues” was the recipient of the 2021 Narrative Feature Fan Favorite at American Black Film Festival and an official selection of Queer Screen’s Mardi Gras Fil Festival 2022.   An opening night party will also follow the film with guest of honor and Vanguard Award winner Patricia Velásquez. Velásquez is best known for her portrayal of Anck-su-namun in “The Mummy” (1990) and its sequel, “The Mummy Returns” (2001). She has appeared in numerous other films including “The Curse of La Llorona” (2019) and television shows including “Arrested Development” and “The L Word.” She is the founder of the Wayuu Taya Foundation which is dedicated to aiding Venezuelans struggling along the Colombian border. She was appointed the UNESCO Artist for Peace and is a Goodwill Ambassador at the Organization of the American States.   Continuing its mission to unite the community through premier social events and programs that inspire, entertain, educate and encourage a sense of community, this year’s festival features more than 45 international features and documentary screenings, panel discussions, three shorts programs, exclusive virtual showings, Cocktails & Cinema Happy Hours and parties that will take place across various venues in Miami-Dade County through May 1.   OUTshine special events of note also include the Ladies Spotlight Film, “Anaïs in Love” (2021), the South Florida premiere of the festival Centerpiece film “Girl Picture (Työt Työt Työt)” (2022) and the Men’s Spotlight film “Lonesome” (2021) plus the North American premieres of “All Our Fears” (2021) and “Swing Ride (Calcinculo)” (2022) and the U.S. premiere of “What We Know (Lo Que Sabemos)” (2021). Other films include award-winners “The Divide” (La Fracture)” (2021),  “Finlandia” (2021), “Framing Agnes” (2021) and “Private Desert (Deserto Particular)” (2021). Festival Closing night will feature “Cop Secret” (2021) and OUTshine’s annual audience film awards soiree on May 1 at 6 p.m. at the Sandrell Rivers Theater.   OUTrageous, OUTspoken, and OUTstanding, the 24th annual OUTshine Film Festival Miami is presented by Lexus, Gilead and Miami-Dade County.   Tickets to the opening night film “B-Boy Blues” and after-party are $55 each and include an open bar by Bacardi, light bites and live music. This is an in-person screening, only. Tickets start at just $8 for other individual films with group discounts and additional offers available.   For more information, films line-up and tickets for the 24th annual OUTshine LGBTQ+ Film Festival Miami, call (877) 766-8156 or visit outshinefilm.com. A full schedule of parties and special events is available at outshinefilm.com/events.