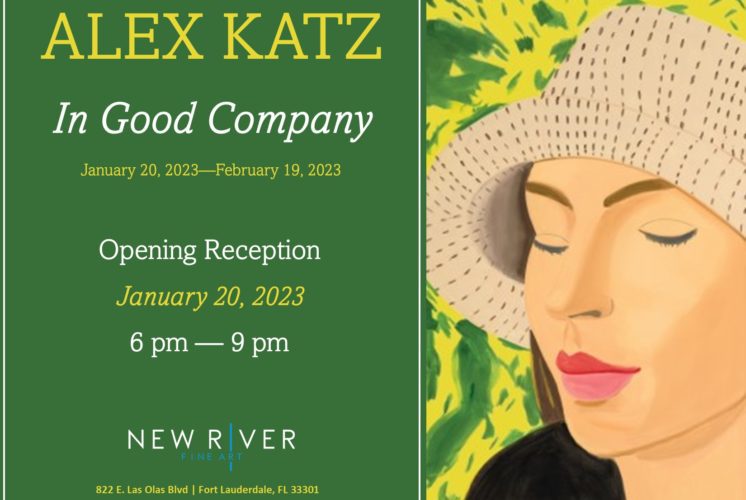 ALEX KATZ In Good Company   New River Fine Art is proud to announce, Alex Katz – In Good Company, an exhibition consisting of a selection of original paintings & drawings, fine art prints, and other artworks by the American Icon, Alex Katz opening January 20, 2023.   This exhibition offers a fascinating glimpse into the evolution of Katz’s style and his signature minimalistic aesthetic, while reflecting the artist’s continued experimentation with form and color. The result is a curated exhibition that is timeless yet continuously feeling fresh and raw.   Over the course of his more than seven-decade career, this championed artist has created an impressive body of work that includes portraiture, landscapes, and still life. Nevertheless, many of his most iconic paintings feature his wife and muse, Ada. Recently, the artist has revisited some of his favorite paintings of his beloved spouse by creating ten new fine art prints that will be featured in New River Fine Art’s Alex Katz – In Good Company exhibition.   “In Good Company features both new prints and a host of works from Katz’s archives”, stated Lisa Burgess, President of New River Fine Art.  “His iconic style, stripped of all but the most essential elements, was once criticized as too simplistic but is now being reexamined and finding new appreciation among critics in light of his Guggenheim retrospective.”   New River Fine Art’s exhibition, Alex Katz – In Good Company, will briefly coincide with The Solomon R. Guggenheim Museum exhibition, Alex Katz: Gathering, a career retrospective on view from October 21, 2022, through February 20, 2023.   “The fact that Katz is 95 years old and still producing artwork at such a high caliber is a testament to his creative drive,” said Wissam Elghoul, Gallery Director.  “These are some of the finest prints I’ve seen in years.”   Alex Katz – In Good Company is sure to delight both longtime fans of Katz's work and those just discovering his unique vision.   **---**   More about Alex Katz: Alex Katz is an American painter and sculptor whose works are immediately recognizable by their colorful, two-dimensional style, which was created as a reaction to the Abstract Expressionism of the 1950s. Katz's art is often described as minimalistic, due to his use of simple shapes and flat colors. However, despite its apparent simplicity, Katz's work is quite complex. Through his choice of subject matter and composition, Katz can capture the essence of his subjects in a way that is both beautiful and evocative. In addition to his paintings, Katz has also produced many sculptures showcasing this recognizable aesthetic. His work has been featured in numerous exhibitions, and he has received many prestigious awards. Today, Alex Katz is widely regarded as one of the most important American artists of the twentieth century.   About New River Fine Art As one of South Florida’s most prestigious fine art galleries, New River Fine Art presents original works and fine prints from Impressionist, 20th Century, Post War and Contemporary Masters, Mid-Career and Emerging Artists, making it the premier visual arts gallery in South Florida.