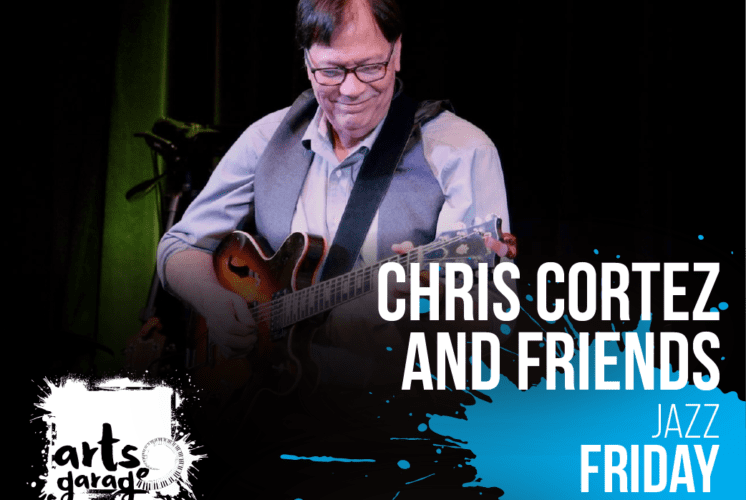 An energetic, yet smoothly presented evening of original jazz and unique arrangements of popular tunes, and standards. Featuring an eclectic mix of vocals and instrumentals, the individual performers are showcased throughout, with Cortez’ dazzling guitar leading the way. Selections from the new CD, and also selections from previous releases. A mix of vocal and instrumental material covering a range of jazz styles. Latin, blues, swing, and fusion styles are all represented. Chris is a wonderful guitarist, and also a fine vocalist, and storyteller. He is warm, welcoming, and often funny. PERFORMER BIO Chris Cortez is a busy man. The number of jobs he performs suggests the presence of more people. Guitarist, composer, vocalist, bandleader, arranger, producer, engineer, label head, entrepreneur, and community leader, to name a few. Cortez’ work ethic puts him in the middle of everything, and he always seems to be running non-stop. In 2015 Chris paused the record label Blue Bamboo Music and returned to his hometown of Winter Park, Florida to build a performing arts center with his wife Melody. In six years’ time, Blue Bamboo Center for the Arts became a community asset… an amazing venue that supports the local and national music scene, presenting a diverse range of artists in an intimate concert setting. Chris was named one of the most influential people in Central Florida by Winter Park Magazine and when asked how he managed to accomplish so much, Chris’ answer was “Start with it’s possible and the rest is logistics.” Building community is the driving force. In 2013 Downbeat magazine published a profile piece called “Unified in Houston,” focusing on his label and its positive effects on that community of musicians. He is an advocate for the arts and for artists. As Blue Bamboo, or ‘the boo” (as fans affectionately call it) became sustainable, Chris began to direct his focus back to his own personal musical goals and revived the label. The first recording project was Hermanos, a collaboration with old friend Larry Williams, which became a staple of jazz radio for most of 2022, rising to #1 on the RMR chart. Chris’ guitar style is uniquely his own. There is a relentless sense of meter and precision. His vocabulary is instantly recognizable to fans of his previous work. Growth and evolution are obvious, but Cortez still sounds like Cortez. There is a compositional feeling in his solos. Themes unfold with an emotional arc that takes you on a journey, and his songs provide the perfect backdrop for that kind of development. There is a landscape to explore. There are plenty of surprises, but everything makes sense and seems filled with intention. Chris arranged several concert events featuring drummers Joel Rosenblatt and Jeff Sipe, bassists Ron Jenkins and Doug Mathews, saxophonist Jeff Rupert, trumpeter John DePaola, flutist Dan Jordan, and pianist Bob Thornton. From the first notes, we are on a fun, e-ticket ride and that is no accident. Chris was inspired to make this record with these people.

With his guitar clearly in the spotlight, Chris chose mostly original music with 3 notable exceptions; The Visit, a tribute to guitar master Pat Martino with solos by Thornton, Cortez, and Sipe; That’s the Way of the World, a swinging rendition of the classic Earth Wind and Fire anthem featuring solos from Thornton, Jordan, and Cortez; Closing the album, A Remark You Made, Chris’s stunning solo acoustic guitar interpretation of Joe Zawinil’s heartbreaking ballad, dedicated to those lost in the pandemic.The six original tunes reflect an eclectic mindset, and a penchant to show off this incredible band. Arlington Park is a 5/4 romp that works the ensemble’s tight, on top of the beat, approach, featuring solos by Rupert, DePaola, and Rosenblatt.

Walt Hubbard drums has played with Ira Sullivan, Dave Stryker, Clarence Palmer, and countless others. He has been a staple on the Central Fla jazz scene for 40+ years. Doug Mathews bass has played with many of the same people, but is well known for his tenure as the bass player of choice for jazz icon Sam Rivers. Ed Krout is house pianist at Blue Bamboo Center for the Arts, and Pilars Martini bar, and owner of Phat Planet recording studios. Dan Jordan is a brilliant flute and tenor saxophonist, also well known for his work with Maynard Fergusen, Sam Rivers, and countless others. BAND MEMBERS:Chris Cortez – Guitar/VocalsWalt Hubbard – DrumsDoug Matthews – BassEd Krout – KeyboardsDan Jordan – Sax