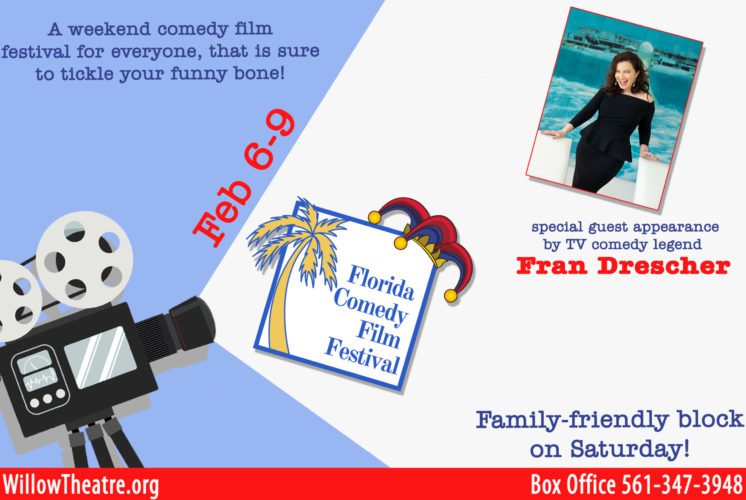 The Willow Theatre will be the site of The Florida Comedy Film Festival Feb 6-9, and...tv/film star and comedy legend Fran Drescher WILL BE HERE!

This weekend comedy film festival is sure to tickle your funny bone. Join us for live screenings from filmmakers worldwide of feature films, foreign films, web-series, short films, student films, and more. Each day will consist of several blocks of films, including a family-friendly film block on Saturday afternoon, Feb 8th. The event will be hosted by actor and comedian Eddie Brill.

Entertainment A-lister Fran Drescher will kick off the evening film block Saturday Feb 8th. Fran will also be at a meet & greet with fans and festival attendees at the awards gala (Feb 9), where she will be honored with The Florida Comedy Film Festival Comedy Legend Award.

Admission includes mingling with and meeting some of the filmmakers as well as attendance to the festival Q&A’s with top entertainment professionals and performers.

Every film shown is of a comedic nature including several films that will have their Florida premier at the festival. One of the films being shown Saturday night February 8th and Sunday afternoon February 9th, (Marriage Material) was recently NOMINATED FOR AN ACADEMY AWARD!

MMPA ratings vary per film. Tickets for the film screenings can be purchased at the Willow Theatre Box Office at Sugar Sand Park Community Center, 300 S. Military Trail, Boca Raton, by calling 561-347-3948, or online at: https://sugarsandpark.org/florida-comedy-film-festival

Join us for this amazing event in Boca Raton!