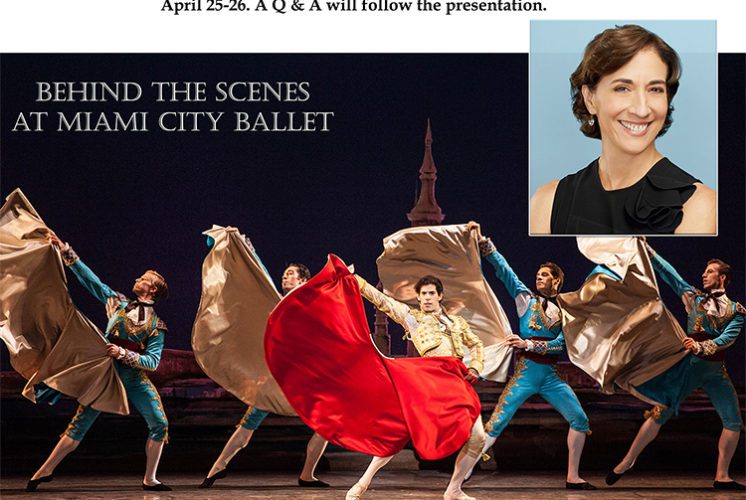 Funding Arts Broward (FAB!), a nonprofit volunteer-based arts organization committed to supporting, sustaining and enriching the arts in Broward County, will present its Spring Luncheon and Annual Meeting on Tuesday, March 10, from 11:30 a.m. – 1:30 p.m. at Broward Center for the Performing Arts. The luncheon will feature special guest speaker Lourdes Lopez, artistic director of Miami City Ballet. A Q & A with the company’s dancers will follow the presentation. Lourdes Lopez was recently named one of “The Most Influential People in Dance Today” by Dance magazine. She became artistic director of Miami City Ballet in 2012, bringing with her a nearly 40-year career in dance, television, teaching and arts management. Under Lopez’s direction, Miami City Ballet has become one of the country’s premier ballet companies. As a soloist and principal dancer with New York City Ballet, Lopez danced for two legends of the art form, George Balanchine and Jerome Robbins. Lopez is a former WNBC-TV cultural arts reporter and senior faculty member and director of student placement, student evaluation and curriculum planning at New York’s Ballet Academy East. She served on the dance faculty of Barnard College and guest taught at numerous dance institutions and festivals in the United States.  In 2002, she became the executive director of the George Balanchine Foundation, and subsequently co-founded The Cuban Artists Fund, which supports Cuban and Cuban-American artists in their endeavors. In 2007 she received an award from the American Immigration Law Foundation honoring Cuban Americans for their accomplishments and contributions to American society. Lopez also co-founded Morphoses with Christopher Wheeldon in 2007 — a New York-based dance company aiming to revitalize dance through innovative collaborations with important artists from the worlds of music, visual arts, design, film and fashion; and by inviting younger and broader audiences to engage in and actively experience dance. In 2014 Lopez was elected to serve on the Ford Foundation’s board of trustees, marking the first time an artist was elected to serve on its board and in 2011, she received the prestigious Jerome Robbins Award for her years in dance. She has served as a dance panelist for the National Endowment for the Arts. FAB! Spring Luncheon tickets are $55 (members and non-members). To purchase tickets, visit http://bit.ly/FABSpringLunch2020. To learn more about FAB! including how to become a member or support the arts, visit www.fundingartsbroward.org or email fundingartsbroward@gmail.com. About Funding Arts Broward (FAB!) Funding Arts Broward, (FAB!) is a non-profit volunteer-based arts organization committed to preserving and cultivating the arts in Broward County, Florida. FAB!’s mission is to enrich the local community by funding programming for Broward County-based visual and performing arts organizations. Since its inception in 2003, the organization has granted more than $3.3 million to local visual and performing arts programming. More information about FAB! can be found at www.fundingartsbroward.org.