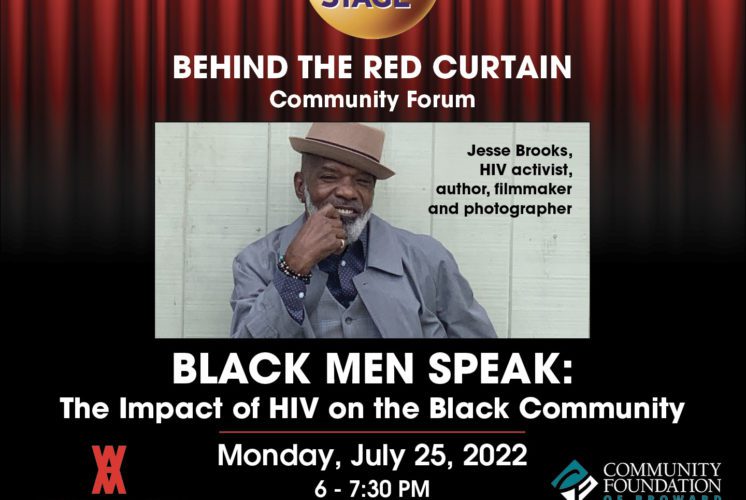 Island City Stage Presents a Behind the Red Curtain Free Public Forum: “Black Men Speak: The Impact of HIV on the Black Community”

HIV activist and “Busting Stigma” author Jesse Brooks will address the social issues of being African American, gay and HIV positive during “Black Men Speak: The Impact of HIV on the Black Community,” Island City Stage’s last Behind the Red Curtain public forum of its 10th anniversary season. This free forum precedes the South Florida premiere of Donja R. Love’s “One in Two,” debuting on August 4. This important panel discussion will also feature:

The forum will be moderated by World AIDS Museum and Educational Center Executive Director Terry Dyer.   Directed by Moxie Theatre in San Diego co-founder and NAACP theatre award-winner Delicia Turner Sonnenberg, “One in Two” refers to the current HIV projection rate that 1 in 2 black men who have sex with men (MSM) and 1 in 4 Latino MSM in the United States will be diagnosed with HIV during their lifetime, according to a 2016 analysis by researchers at the Centers for Disease Control and Prevention (CDC). Unlike other plays, in this production, the audience chooses nightly which actor must portray the lead character in this unforgiving story of a Black man diagnosed with HIV. Through humor and pathos, Donja R. Love has written a deeply personal call to action and created an unflinching portrait of being Black and gay in America today.   Activist, filmmaker, photographer, and columnist, Jesse Brooks is currently co-chair of the Bay Area State of Emergency Coalition (BASE), advocacy coordinator of the AIDS Healthcare Foundation of Northern California, and co-chair of UCSF/CAPS Research Community Advisory Board, and a weekly columnist for the largest African American paper in the Bay Area, Post News Group.  He has worked on multiple research studies, including studies for the San Francisco Department of Public Health HIV Research Division on the now famous “Explore Study” (Men who have Sex with Men, sexual behaviors and HIV transmissions) and University California San Francisco’s Urban Health Study (HIV transmissions among the IDU community). Brooks co-wrote and starred in “The Ceremony,” a movie about internal battles, addiction, internal homophobia, and internalized stigma around HIV status, which showed at the 2006 Black LGBT film festival.  He was part of Corner Stone Productions, the first-ever theatre group allowed in a County Jail (Santa Rita) to present vignettes involving HIV awareness and education, sponsored by Gilead Sciences.  He was involved in the PBS documentary “The End game: HIV/AIDS in Black America” and his work has been featured in numerous HIV education campaigns and a tabletop picture book with actor Danny Glover and Congresswoman Barbara Lee, entitled “This Could Be Me: The real story of HIV/AIDS in Oakland.”   This free forum is sponsored by Community Foundation of Broward and is supported by World AIDS Museum and Educational Center. Guests may RSVP by visiting islandcitystage.org/behind-the-red-curtain-community-forum.   In honor of its 10th anniversary season, Island City Stage created The Behind the Red Curtain free public forum series to engage the community in timely, relevant issues that are both addressed in its productions and affect the South Florida community. Follow Island City Stage on Facebook at facebook.com/IslandCityStageFL and on Instagram at @islandcitystage1.   For more information, please call (954) 928-9800 or visit islandcitystage.org.