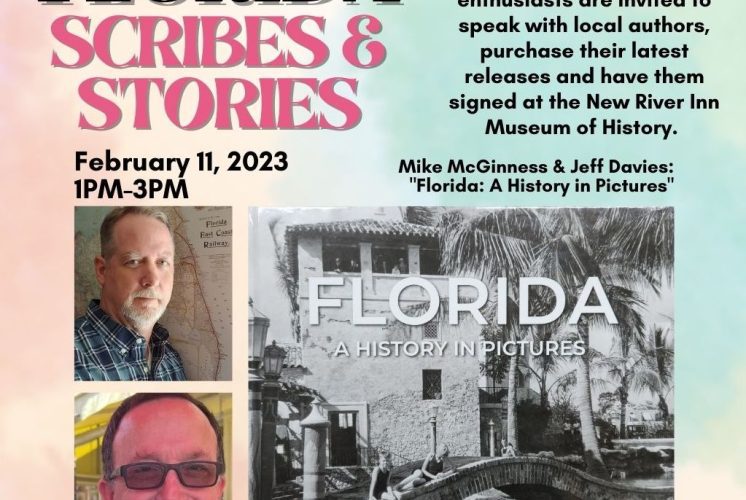 History Fort Lauderdale, proud steward of our community’s past by making our heritage accessible and engaging to residents and visitors, will present a free book signing and meet & greet with Mike McGinness and Jeff Davies, authors of “Florida: A History in Pictures” (MacIntyre Purcell Publishing Inc.), on Saturday, February 11, from 1 p.m. – 3 p.m. Their appearance is part of History Fort Lauderdale’s “Florida Scribes & Stories,” a meet the author monthly series that offers literary and history enthusiasts a chance to speak with local authors, purchase their latest releases and have them signed. Mike McGinness and Jeff Davies have put together the definitive photographic account of the Sunshine State. With more than 130 photographs ― many of them seen for the first time ― “Florida: A History in Pictures” offers a stunning portrait of this one-of-a-kind state. From the stone forts at St. Augustine, the oldest continuously inhabited city in the United States, to the Everglades (or “The Big Swamp” as it was called at the beginning of the 20th century) to Bok Tower Gardens in Lake Wales, the Fort Myers Beach arches and Jupiter Inlet Lighthouse, it is all here. Mike McGinness is a native of Florida, born in Orlando and raised in Altamonte Springs and Tampa. He has lived in Florida for more than 50 years. He has a passion for studying history, the great outdoors, bass fishing, music, and rooting for his favorite sports teams. He works in Data Center Operations for AdventHealth in Altamonte Springs and has been with the same company for 38 years. Boca Raton resident Jeff Davies’ passion for history has spanned many decades. His family relocated to North Bay Village from Brooklyn when Jeff was just five years old. Davies was always interested in the history behind old pictures and became known as the family historian. He eventually became the third generation in the audio/video electronics business and continues with this profession today. Guests may RSVP at bit.ly/HFLFloridaScribesMcGinnessDavies2023. History Fort Lauderdale is proud to host a variety of engaging multicultural experiences, year- round. Permanent exhibits include “From Dugouts to Dream Yachts,” a visual narrative weaving the story of the ever-changing use of Fort Lauderdale’s waterways by following the strokes of the first people to today’s sightseers, “The Bryans of Fort Lauderdale” which allows visitors to experience the story of the City of Fort Lauderdale as told through the pioneer family that shaped its development from an agricultural outpost in 1896 to a bustling city in the 1920s to its current status as a leading Metropolis, “Juliette Lange: A Portrait of a Mezzo Soprano,” a fashion and lifestyle glimpse of the socially prominent Fort Lauderdale resident with a lauded career as a star vocalist of musical comedy, plus “Archaeology of the New River” and a multitude of stories and photos sharing the history of other founding families of Fort Lauderdale. The nonprofit museum also hosts an artists’ collective collaborative space. For more information about History Fort Lauderdale, please call (954) 463-4431 or visit historyfortlauderdale.org. Follow us on Facebook at facebook.com/ftlhistory, on Instagram @ftlhistory and on Twitter @FTLHistory. Subscribe to us on YouTube at youtube.com/user/FTLhistory.