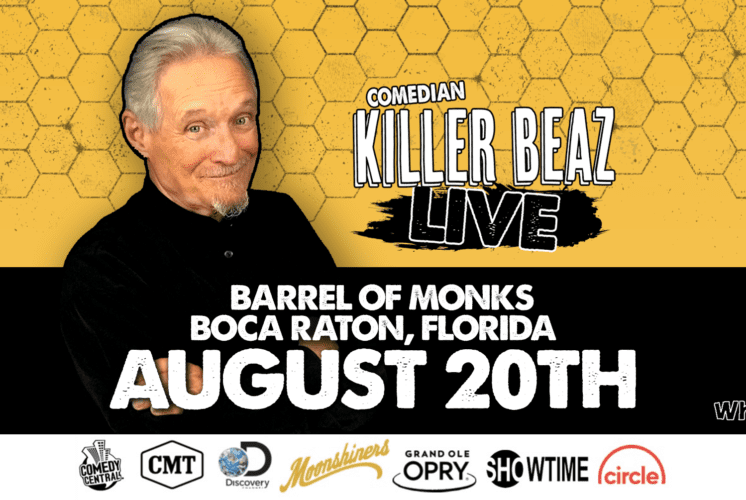 Celebrating his seventh season on Discovery Channel’s hit series, “Moonshiners”, comedian Killer Beaz is touring the nation’s distilleries, breweries and wineries.   With well over three decades of comedy clubs and theatres, television and radio, Killer Beaz is changing things up; reaching out into the country with a tour that is as local as it gets.  There is a “local” scene in just about every city, taking over the taverns and pubs throughout the land that highlights craft-made beverages and cocktail culture in our nation’s breweries, distilleries and wineries, and many of these establishments have entertainment venues.   Killer Beaz has uncorked the “Official Bootleg Tour” and its next stop is Boca Raton, Florida, at Barrel of Monks, Saturday, August 20 at 8:00 PM.  Tickets and information for the tour are available at www.KillerBeaz.com.   Beaz is not only looking forward to performing for his fans, but also to sampling the only-of-its-kind at each stop along the way.  The award-winning comedian will be documenting each leg of the stand-up tour with a tasting and tour of each great facility.  America’s love for wine and beer has evolved with a wine tasting, or a visit to one of the country's many breweries or distilleries     taking a trip to a pub where one can find their favorite locally grown spirits.   Beaz says of the upcoming shows, “Visiting breweries, wineries and distilleries is an excellent way to explore the culture and history of our cities and towns.  My years with Moonshiners TV have inspired me to experience the various flavors our great nation and abundant local products.  Brewers, distillers and wine makers throughout are proving that hand-crafted is the way to go, and I think the show has been an inspiration to many startups in the industry.  I’m betting this will be the most fun tour yet!”   The tour kicked off in May, and will eventually expand to the four corners of the country.  Beaz will continue to make stops on The Grand Ole Opry stage, and will continue his role as a moonshiner, and make other media appearances along the way.  Stay tuned to his social media for an inside look at Americana’s finest…. It’s LIVE, it’s LOCAL, it’s “THE BEST BUZZ in TOWN”.   See him on television, hear him on the radio, see his stage performance live...you'll be "Stung for Life!"  The show is in Boca Raton, Florida, at Barrel of Monks, Saturday, August 20 at 8:00 PM, tickets and information are available at KillerBeaz.com. MORE ABOUT KILLER BEAZ Killer Beaz has his own, unique brand of “Hard Hitting” – "Laugh out Loud" – “Laugh A Lot” – “HI-PROOF” – “High Energy” – “Everyman” style humor that appeals to any audience. When asked, Beaz says about his shows, “I love the art of stand-up comedy! Having been given the opportunity to make people laugh and smile for all these years is truly a blessing!” With many thousands of radio, television and stage appearances, Beaz has been entertaining audiences for over three decades. He is an award winning artist and has been signed with both Sony and Warner Brothers Records, and received reviews such as: "Beaz is 'Killer!’" - Rolling Stone Magazine “Killer Beaz lives up to his name, “Killing” his audience, night after night, show after show!” - Entertainment Today/Las Vegas, NV