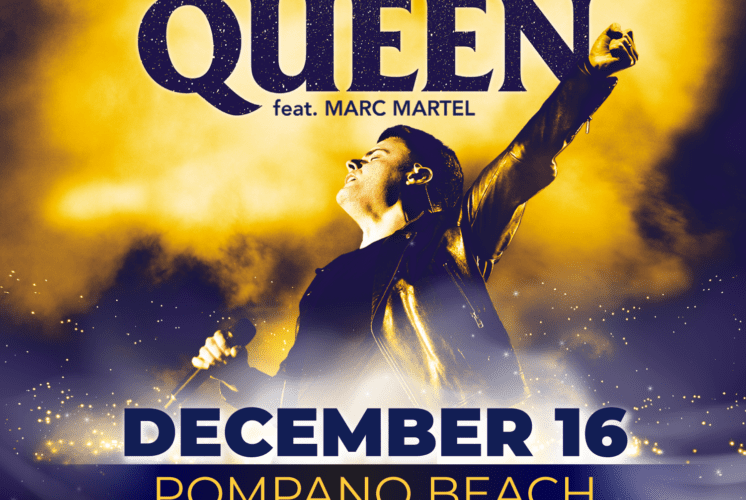 One Vision of QUEEN with Marc Matel

Marc Martel, Canadian rock musician known for his Queen covers and vocals nearly identical to Freddie Mercury, will be performing a Queen tribute on Friday, December 16, at the newly renovated Pompano Beach Amphitheater featuring 3,000 venue seats. One Vision of Queen is a unique tribute where some of the most iconic rock anthems of all time collide with a theatrical performance style and eye-catching production. At its core, the riveting show setlist features some of the band’s greatest hits, including fan favorite “Bohemian Rhapsody,” adrenaline-pumping “We Will Rock You,” “We Are The Champions,” “Another One Bites The Dust,” the stadium-shaking David Bowie collaboration “Under Pressure,” the soulful “Somebody To Love” and “Crazy Little Thing Called Love”. Martel is renowned for his uncanny vocal resemblance to the late Freddie Mercury, so much so that he was cast to sing some of the vocals in the 2018 Bohemian Rhapsody movie. Long before Martel’s YouTube videos went viral, spawning an appearance on “The Ellen DeGeneres Show” and a performance with the surviving members of Queen on “American Idol,” Martel spent 13 years recording and touring the globe with Canadian rockers Downhere. “Marc Martel is a real treat for Queen fans who want to experience the greatest hits known and loved worldwide live in concert with the same voice and sound as Mercury,” said Rafael Velasquez Stanbury, owner of Tiranube Entertainment. The One Vision of Queen show is possible thanks to three local promoters: U-Event, Tiranube Entertainment, and One Music. These Miami-based companies have been promoting live events in South Florida and across the US for more than eight years. Tickets to One Vision of Queen are on sale at https://www.ticketsoul.com/shows/one-vision-of-queen-feat-marc-martel. Watch a sneak preview of the performance here. About the promoters U-Event, Tiranube Entertainment and One Music are events production companies based in Miami with more than 20 years of combined experience promoting live concerts and events. For more information, visit www.tiranube.com, www.ueventgroup.com, and www.onemusicusa.com