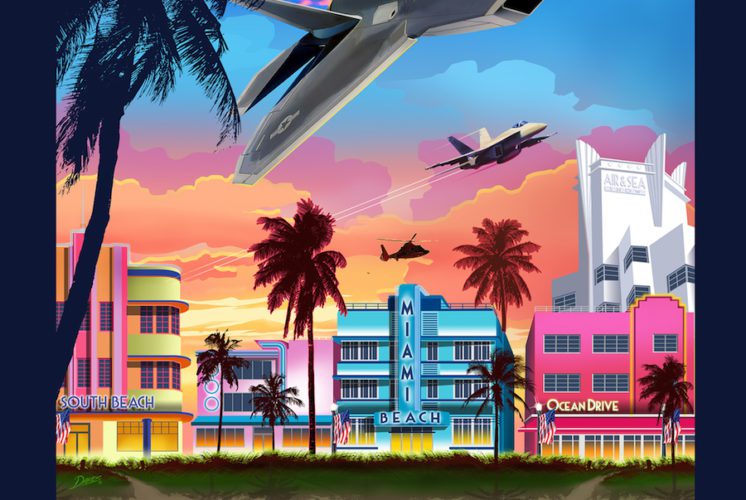 Ocean Dr between 11th and 14th

he world-class signature event the Hyundai Air & Sea Show®, the Greatest Show Above the Earth® returns to Miami Beach on Memorial Day Weekend (May 28, 2022 and May 29, 2022), with the support of the Miami Beach Visitor and Convention Authority.   Hyundai Air & Sea Show® showcases our country’s state-of-the-art military technology through multiple dynamic air and sea events, interactive displays along Ocean Drive, and more, all in support of our National Heroes who dedicate 365-days-a-year to protect our freedom.   The Music Explosion concert returns immediately following the Hyundai Air & Sea Show at Show Center on the beach featuring internationally-known rock band, 3 Doors Down (“Kryptonite”, “Here Without You”, “When I’m Gone”) taking the stage on Saturday, May 28th at 8pm. A special night pyro-parachute demonstration by the U.S. Army Golden Knights Parachute Team will kick off a spectacular fireworks extravaganza following the concert. The Music Explosion kicks off at 5:30pm with the U.S. Army’s: “As You Were” Band and the U.S. Air Force “Max Impact” Band. "There is no better time than Memorial Day weekend to pay tribute to our military, First Responders, and those that have paid the ultimate sacrifice on behalf of our freedom,” said Mickey Markoff, National Salute to America’s Heroes Executive Producer.   Event attendees will have the incredible opportunity of setting their eyes skyward to view state-of-the-art military air assets, as well as view powerboat demonstrations, extreme water sports, an Action/Military Zone featuring a Monster Energy motocross exhibition, a Kids Zone, Military recruiting exhibits and more, all along the beautiful beachfront of Miami Beach, Florida. There is no shortage of engaging activities for fans. The patriotic, family-friendly event has something for everyone.