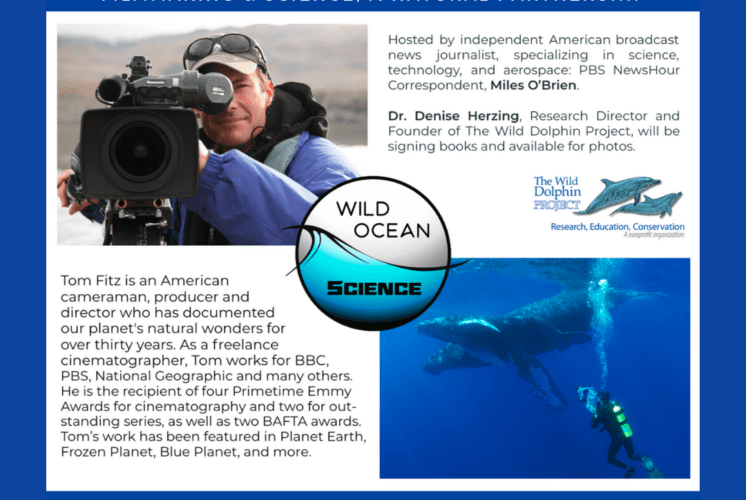 The Wild Dolphin Project, a nonprofit scientific research organization studying the behavior and communication of the Atlantic spotted dolphins in the wild, presents their 5th annual signature event, Wild Ocean Science. This year’s unique event will feature a presentation by Tom Fitz. Tom Fitz is an American cameraman, producer, and director who has documented our planet's natural wonders for over thirty years. As a freelance cinematographer, Tom has worked for the BBC, PBS, National Geographic, Discovery, and many others. He is the recipient of four Primetime Emmy Awards for cinematography and two for outstanding series, as well as a BAFTA Award. Tom’s experience and comfort working underwater are rivaled by few. He is among a handful of cameramen who has worked in all seven continents and five oceans, including under the ice in our planet’s polar regions. He has experience with underwater ROV technology and manned submarines in waters over a mile deep. He owns and operates a RED Helium 8K camera. Hosted by independent American broadcast news journalist, Miles O’Brien, specializing in science, technology, and aerospace who has been serving as national science correspondent for PBS NewsHour. Dr. Denise Herzing, Research Director and Founder of The Wild Dolphin Project, will be signing books and available for photos. Doors open: 5:00pm Tickets: wilddolphinproject.org/tickets