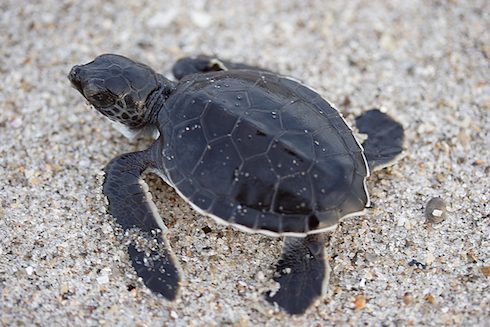 I’ve lived in South Florida for almost 10 years. I’m ashamed to say it, but it wasn’t until last week that I witnessed a Florida sea turtle nesting. It was surreal to say the least – to watch a 300-pound sea turtle lay an exorbitant number of eggs on the shore of Fort Lauderdale beach.

I joined the Museum of Discovery and Science for its last guided turtle walk of the season. We headed out to the beach at around 11 p.m., starting off by setting turtle hatchlings free. It was a rather humorous experience: a group of us huddled around two-inch creatures, watching them crawl their way across an estimated 5-foot expanse of sand into the ocean.

Then came the waiting. As three museum employees and two volunteers searched the beach, the rest of us sat on beach chairs and waited quietly, in hopes that they would see a turtle make its way up to shore and prep its nest. We were instructed to stay as silent as we could, as noise could scare away an approaching turtle, and to turn the brightness of our phone screens to its lowest possible setting. Turns out light, too, scares away these precious sea creatures.

I propped up my beach chair at a 90-degree angle, fighting sleep, my eyes planted on the moon. It was the brightest light visible given the government lighting ordinances during turtle nesting season, which runs from April to October.

About two hours later, the museum staff finally returned to round us up. We perked up: they found one. After a reminder to stay quiet and to avoid the turtle tracks — city officials used the tracks to mark the location of new turtle nests the next morning — we ventured on.

By the time we got to her, she had already started the process of nesting. There was a shallow hole on the shore and sand all over her shell, a sign that she dug into the ground. The staff had positioned a pair of dim red flashlights in the sand so we could see.

One by one, the eggs dropped in.

Parents, kids who looked around 11 or 12, a pair of girls that must have been in college – we all silently watched, mesmerized. Everything else lost relevance. It didn’t matter that it was 2 a.m. and that I had to be up four hours later to get ready for work. I even forgot where we were. The high-rises, the beach resorts, all signs of commercialization had faded away.

I couldn’t keep track of the number of eggs — the Florida Fish and Wildlife Conservation Committee website states a sea turtle lays between 80-120 — but she just kept on going. Eventually, she began to cover up the hole, flinging sand over her eggs with her flippers. She slowly made her way back back across the sand, pausing in intervals before disappearing into the waves…

The Museum of Discovery and Science (401 S.W. Second St., Fort Lauderdale // 954/467-6637) is one of five organizations in South Florida permitted to hold public turtle watches.