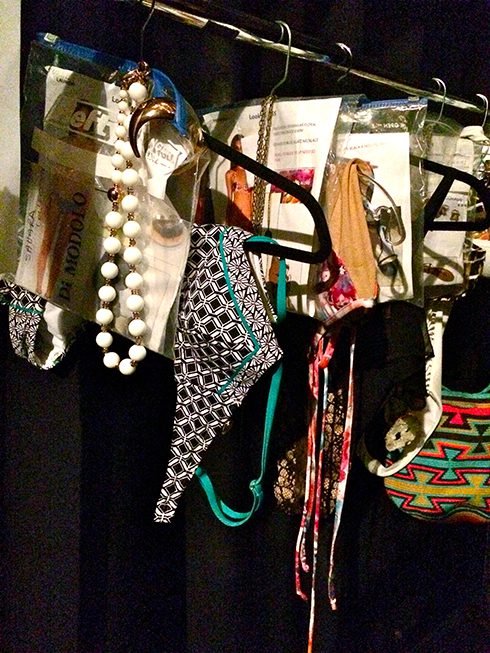 The annual Miami Swim Week, which ran this year from July 15-21, is a sight to behold in more ways than one. I was fortunate enough, through my internship with Boca Raton magazine, to not only cover Swim Week but to step behind the scenes and actually work one of the events. Here are just a few of the things I learned:

1) It’s dangerous: It didn’t take long working backstage at the week’s kickoff event—Miami Splashion—to understand that runway fashion is a contact sport. There were naked models, assistants dressing the models, limited lighting and thousands of dollars worth of bathing suits, jewelry, headpieces and shoes on tables and racks—all compressed into a backstage space that left zero room to move or breathe. Quick tip for any first-timers dressing a model at next year’s show: There’s a 90-percent chance that you’ll be whacked in the eye by one of the bathing suit strings flying all around you—or come face-to-behind with someone’s perky bare butt.

2) Ditch your tankinis: Basic triangle bikini tops and bottoms, with charms on the ties, are no longer acceptable at Florida beaches. We’re now talking cheeky bottoms and neon/bright patterns galore. The more intricate the cutouts and overlapping straps on these bathing suits, the better.

3) Every designer has a story: Where does the inspiration come from for a swimsuit line? For Alexandra Krauze, creator of Lychee Swimwear, it was all about exposing the beauty of tropical jungles through her colorful prints. For Kate Broadrick, designer of K8 Swimwear, the goal was to create swimwear that caters to and celebrates a woman’s body. Take the time, if you have the opportunity, to read up on the history behind these designer lines. You’ll be that much more excited to show off a new bathing suit if you understand and appreciate the designer’s creative choices.

4) Models are people too: Even though all the models I met seemed to be a foot taller than I am (even without their 5-inch heels), with an average of some 30,000 Instagram followers, we actually had some things in common. They too go to college and stuff their faces (with celery, but that’s besides the point) and update their Snapchat stories while sitting around sans makeup.

5) There’s a thread that ties art and bikinis: I noticed that several bathing suits modeled during Swim Week, specifically Mohini Swim’s collection, embodied the principles behind art styles like Art Deco and neoplasticism. These designs, characterized by vertical and horizontal lines or bold geometric shapes and detailed ornamentation, prove that the runways of Paris and Milan aren’t the only style capitals where fashion is art.

6) Never accept one tattoo when you can accept five: Two things to know about me: 1) I always forget to put on jewelry in the morning, so I typically don’t wear any. And 2) I change my mind too often to commit to a tattoo. But I had a revelation on both fronts during Swim Week thanks to temporary jewelry inspired tattoos. At the Lychee Swimwear and Gypsea Swimwear showcases, a company called Dash of Flash was applying metallic and super trendy tattoos. I ended up with five on my arms, wrists, hands and back. Game changer.

7) Gypsea turns heads: Following this idea that fashion and art overlap are the creative minds at Gypsea Swimwear, which featured some of my favorite designs at Swim Week. The company, led by designer Emma Jones and surf photographer Scott Bauer, prints images from nature onto their signature bathing suits for a one-of-a-kind look. The Ava Cap Shoulder Top and Ava Brazilian Hipster Bottoms stood out. Similar to a crop top, the bathing suit top is gridded with an elastic shoulder design. The suit has a print of the Fakarava beaches and is impossible to walk past without eyeing.

8) The Shelborne Hotel throws a wild party: Along with the requisite models in pieces designed by Mohini Swim, this party had everything: a mob of young adults in the pool, tents filled with sample watermelon skewers, bathing suit sales, beach-inspired jewelry, beach balls and A-list guests. And what party would be complete without liquid nitrogen infused champagne ices?

9) Confidence is key: There were many moments this past week that I compared myself to the models I was seeing everywhere; what girl wouldn’t? But I realized that what made these models so beautiful wasn’t their bodies and swimsuits and makeup—it was the confidence they radiated when entering a room. Be proud of what makes you different, and rock it.

Chelsea Stromfeld is a junior at the University of Florida studying public relations and business administration, who is interning at Boca Magazine this summer. With an extensive set of interests, she loves to stay laughing, social, creative and active. Give her a camera, food or a person to talk with, and she is all set. You can reach Chelsea at chelseastromfeld@gmail.com.