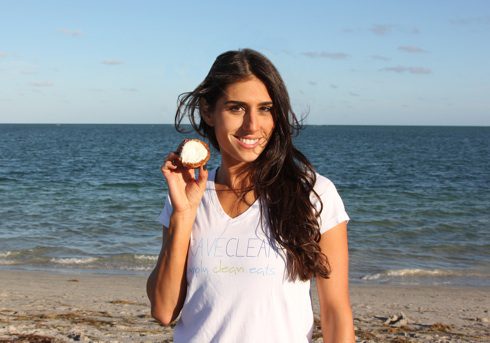 There used to be a distinct line between healthful and delicious. Now, that line is almost non-existent. You can credit part of this change to Francesca Caltagirone, the 24-year-old founder of Crave Clean.

Opening up in Miami by the beginning of June, Crave Clean will be the first free-standing protein bakery in South Florida, joining the array of farm-to-table joints, juice bars and specialty restaurants that satisfy the increasing population of health nuts and fitness enthusiasts. As Caltagirone found out, that group is composed of more than just gym rats and body builders; in fact, moms are big consumers of her products.

“I think a lot of people are getting on the healthy trend because they want to feel better, and they want to be more energized,” she says. “I don’t think that everyone is so channeled into being thin anymore, that whole concept. I think it’s just living healthy, living longer, being more aware of the way the food affects you. And I’m excited to be a part of that process.”

Started in a home kitchen in Miami, Crave Clean was born out Caltagirone’s desire to indulge in a healthy treat. About a year ago, she changed her lifestyle, working out daily and really watching what went into her food. She drank protein shakes, snacked on protein bars, but couldn’t find a healthy replacement for the baked treats she had been making all her life.

“I was having a hard time finding something that was pure and yummy and I really looked forward to having as my snack,” Caltagirone says.

So she started experimenting. She went through recipe after recipe, honing in on her perfectionism to create a product that she was really happy with. She brought them into her gym to have people taste test her creations, and while her intention was simply to make a treat for herself, people became curious and wanted to know more.

“They were excited cause it was too good to be true,” she says.

That’s when she realized that she could combine her passion for baking into a business that could change other people’s lives the way it changed hers. She could show people that eating healthily didn’t mean having to go through an extreme diet, that what it really required was a lifestyle change.

She jumped into the project wholeheartedly, baking muffins, cupcakes, cookies and cakes out of a commercial kitchen. Made with healthier substitutes and secret ingredients, the result was an array of moist, fluffy, delicious treats that are all less than 150 calories with at least seven grams of protein. Since they’re made with less than two grams of sugar, these baked goods aren’t overly sweet the way regular treats are.

They’re incredible concoctions – but not surprisingly so considering Caltagirone traded in her cartoons for the Food Network when she was younger.

She currently sells her products at a local Mobil Mart (Coral Way and 32nd Avenue) and LA Fitness (8555 S.W. 124th Ave., Miami). She also delivers for an additional fee, which varies based on your location. For Boca Raton, there is a minimum order of $50 or a box of 24.

The Crave Clean bakery, which will be located at 3822 S.W. Eighth St., Miami, will offer an expanded menu that includes shakes and larger protein muffins.

For more information or to get Crave Clean at your next event, visitsimplycleaneats.com or call 305/431-4005.