Five SunFest Artists You Should Discover 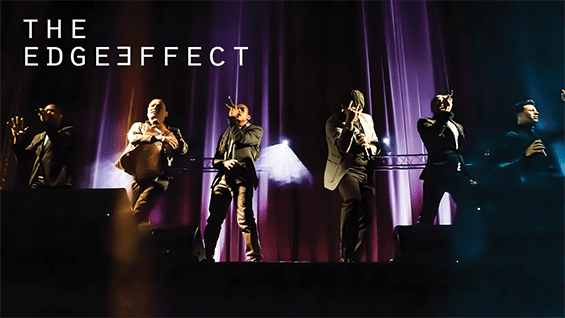 SunFest is, finally, right around the corner, dominating the West Palm Beach waterfront with three stages of live music, an art fair and a 5K run starting April 30. But instead of focusing on the bands and singers you’re already excited to see, we decided to spotlight a few of the undercard acts that are well worth showing up early. Here’s a look at five of SunFest’s best under-the-radar groups.

The URL for the group The Edge Effect is cheekily named “notaboyband.com,” which speaks to its desire to be recognized beyond its pop-harmonic panache. The sextet of beautiful-voiced young men is certainly more ambitious and sonically sophisticated than your average boy band, bringing to the group years of experiencing on tour with artists like Prince, Stevie Wonder, Tony Bennett and others. They founded the group to showcase their a cappella skills, resulting in their Kickstarter-funded 2013 debut, “Alphabet Soup”—an album that bucked tradition by layering real instruments over their impressive vocals. For the live shows, though, the a cappella style rules, and believe us: You won’t be missing the drums and keys.

It’s hard to imagine what heartache, pain and despair that the longhaired, preternaturally gifted 17-year-old Longwood, Fla. native Daniel Heitz has experienced in his young life. But, whether autobiographical or not, his intricate songs channel the angst and maturity of bluesmen two or three times his age. Born into a musical family, with training on guitar dating back to age 9, Heitz was raised on the blues legends that continue to inflect his own sound: BB King, Albert King, Joe Bonamassa. With a tonal palette as timeless as Heitz’s, it’s clear he’s an old soul.

Hailing improbably from Nashville—whose tradition of country music probably gave them a genre to rail against—the four-piece Five Knives fuses electronic and hard rock music with a piss-and-vinegar muscularity and a political consciousness that bring MIA to mind. The group, which still may be classified as Nashville’s best-kept secret, has recently found a home on Red Bull Records, which is appropriate, because Five Knives are themselves an energy shot. The band has been gracious enough to give away its debut EP, “The Rising,” for free through its website, fiveknivesmusic.com, but don’t let that stop you from watching its official music videos: Their anarchic, dangerous imagery injects powerful inspiration into this archaic medium.

I have a feeling that it’s only a matter of time before 23-year-old Jillette Johnson will be everywhere—on Top 40 stations to be sure, but also piping through supermarkets and salons and network drama montages. Johnson actually auditioned for “The Voice,” made the initial cut, but then opted not to appear on the show so that she could instead focus on making music, a counterintuitive decision that paid off in a record deal with Wind-Up. Her 2013 debut release, “Water in a Whale,” is as beautiful, smart and quirky as piano-driven pop music can be, and it should please enthusiasts of Adele, Christina Perri, Regina Spektor and Fiona Apple. She’s currently supporting her latest single, “Torpedo,” which represents her big push toward mainstream stardom. See her now before her ticket prices soar astronomically.

This five-piece from Clearwater throws its sound back to punk’s third-wave glory days of the early ‘90s, with a horn-driven, ska-inflected sound. Dynamics shift from bouncy, peppy trumpet blasts to three-chord explosions of mosh-ready speed and fury, conjuring both Reel Big Fish and NOFX. A hardworking, hard-touring band since the mid-2000s, Victims of Circumstance have benefited from a friendship with the Mighty Mighty BossTones, whose saxophonist Tim Burton has produced some of its music. The band’s latest album, “Decades,” features covers of songs from the past seven decades, from Buddy Holly’s “Rave On” to OneDirection’s “What Makes You Beautiful.”