From the Magazine: Shark Attack 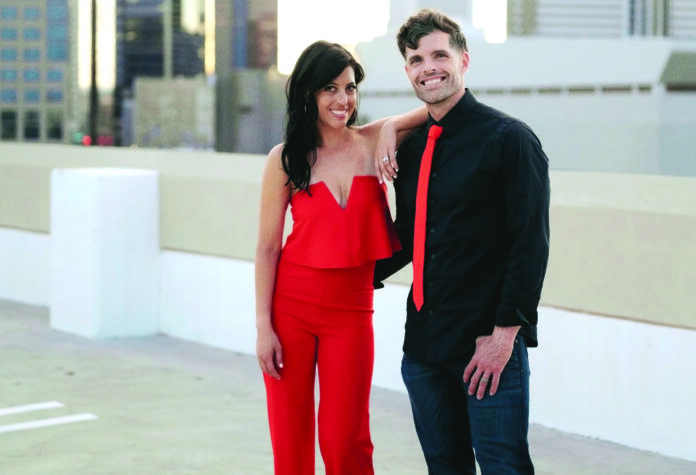 Despite a setback on national TV, a Boynton Beach couple continues its quest to make snacking sexy

If you’re thrown into a tank of sharks, you might just get bit. Boynton Beach couple Jennifer and Michael Gallagher discovered this in fall 2020, when they appeared on ABC’s “Shark Tank” to pitch His & Her Bar, their aphrodisiac nutrition supplement.

After performing an a cappella rap Michael wrote about the bar’s libidinous benefits (“super soaker on the palate, call it wet wet / fall in love with the flavor, so consequent”), the Gallaghers painfully suffered through what amounted to a summary dismissal. With just 500 bars sold at the time, totaling $2,000 in revenue, the Gallaghers found themselves small fry in the shark tank, leaving the Las Vegas studio empty-handed. Michael even broke down and wept on camera, but his emotional revelation of personal health and employment crises failed to persuade the investors.

“It took us a week to decompress,” says Jennifer, on the patio of Delray’s French Bakery Café in February, a month after the episode aired. “Michael and I walked away thinking we got hit by a bus and ran over.

“I think everything has a lesson,” she adds. “Not many people can say they made it through this extensive process. Even before they filmed, they said to us in a call, ‘do you realize you are such a small percentage of people who actually get to this point, before you even go in front [of the sharks]?”

This accomplishment, while not achieving the Gallaghers’ desired result, has nonetheless served as an early capstone for their brand, leading to an uptick in media coverage and a boost in sales. And, as the sharks indelicately pointed out, the brand is new, with nowhere to go but up.

Jennifer developed with the idea for a unique “his and her” snack bar in 2019 while jogging—the Gallaghers maintain a focused fitness regimen—and originally conceived of two bars, with different ingredients tailored to each gender. It was Michael who tweaked the idea of combining the idea into a single bar with aphrodisiac ingredients. “We would constantly go to this grocery store after our workout class, and I would look at this kaleidoscope of protein bars, all these different colored packages. I’d never seen anything like [an aphrodisiac bar],” he says. “Jennifer was instantly on board.”

While trumpeting the potential bedroom benefits of His and Her Bar, the Gallaghers caution that it’s not an instant-gratification product, nor is it a panacea if couples are dealing with problems in their sex lives. “We call it sexy snack time,” Jennifer says. “It’s more of a lifestyle, a thing you share together.”

The Gallaghers both work service jobs in addition to managing online sales for the bar. They have invested some $8,000 into His and Her Bar, and continue to face challenges involved with marketing the product: Facebook bans ads for anything sex- or aphrodisiac-related, and offering samples to grocers has been nixed since the pandemic.

Then there’s the “Shark Tank” fallout. Their appearance has accrued a reputation on the internet as one of the worst pitches in the show’s history. The way the Gallaghers defend it, the producers turned a complex 90-minute discussion into a couple brief segments of degrading TV—all of it following a mandatory 12-day quarantine in which the couple couldn’t leave their hotel room at the Venetian. They spent it watching too many “Shark Tank” reruns and basically going stir-crazy.

Since their appearance, they’ve had to adjust their social media diets.

“I think it gets easier to ignore and delete and block as the time goes on,” Jennifer says. “At the beginning, I was trying to tell people in a nice way, please stop judging. You don’t even know us, we’re really good people. Then over time, the delete and block works a lot better. … At least we got 100,000 [YouTube] views.

Adds Michael: “At least we’re the best at being the worst pitch ever!”