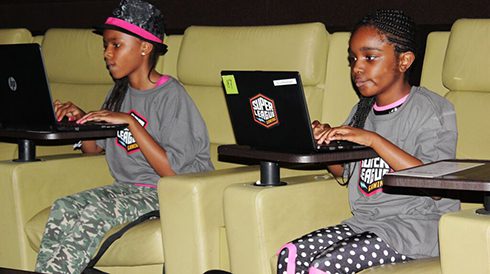 Video gaming, an activity often criticized for being antisocial, is getting a new, more interactive environment with Super League Gaming. The concept, founded by parents of children who enjoy both gaming and athletics, combines those elements for video gamers into a social “team sport atmosphere,” according to president and COO Brett Morris, father of two gaming daughters, ages 9 and 13.

Super League Gaming invites teams of boys and girls (ages 7 to 14) to play video games at movie theaters in 25 cities around the country against likeminded peers. Participants form teams with their friends to play a specific game for six consecutive weeks (the league starting this fall will feature the game Minecraft), much the same way, Morris says, that kids sign up for a Little League season.

This summer, Super League Gaming is holding one-off events in each of the 25 cities that will host league play—including a recent session at Boca Raton’s iPic Theater. Gaming enthusiasts filled the sold-out iPic, which was buzzing with excitement, to try their hand at Minecraft, a popular “open world” building-block game that allows players to create structures, acquire resources and, of course, avoid a requisite number of terrifying creatures in order to survive.

Kids were consistently talking, both to the players next to them and to themselves, about the activity that was happening on the big screen. As the game transitioned between its creative and survival phases, the theater erupted with screams of excitement.

“When I help with the league and watch these kids play Minecraft in the theater, the inner child in me comes out [as well],” says Jordan Steigelfest, 16, son of co-founder David Steigelfest.

Parents, meanwhile, seem equally thrilled about Super League Gaming. They enjoyed seeing their sons and daughters being interactive with other kids, as opposed to playing games alone in their bedrooms. One mother said she had never seen her son so excited—even while they were on vacation in Costa Rica, he couldn’t stop talking about the Super League Gaming event.

Going forward, Morris would like to see gaming leagues in movie theaters become a normal activity for kids and parents. “I think at one point there was kind of a stigma [about] being a gamer [compared to] being an athlete,” Morris says. “Now, it’s just about having fun; it means nothing else other than that.”

Super League Gaming’s six-week fall sessions at iPic begin Sept. 15. The fee for participating is $120, which includes a free jersey. According to Morris, (yet-to-be-determined) prizes will be awarded at the end of the season. For more information, visit superleague.com.

Casey Farmer is a sophomore at Lehigh University studying journalism and business, who is interning at Boca Magazine this summer. Casey spends most of her time on the golf course, both recreationally and as a member of Lehigh’s team. Aside from golf, she loves iced coffee, Zumba and dogs. You can reach Casey at caseyfarmer@bocamag.com.