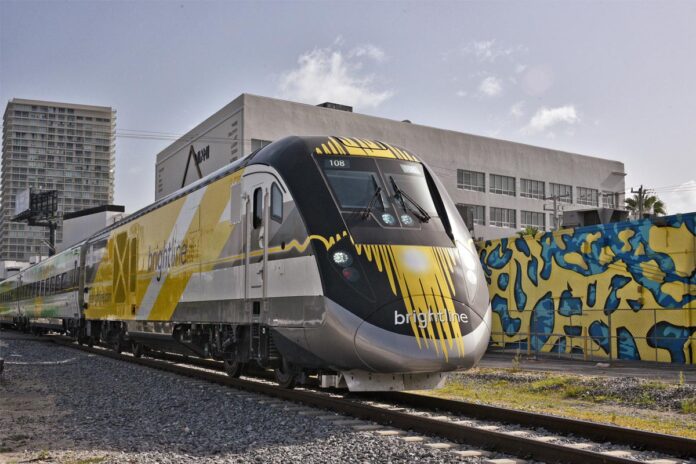 How will Boca Raton residents know if the city’s $10 million investment in Brightline is paying off?

At this point, there’s no way to tell. And there never may be a way to tell for sure.

Service began last month from new stations in Boca Raton and Aventura, in northern Miami-Dade County. Last week, Brightline Vice President Ali Soule gave the city council an update on the company’s safety efforts. Brightline’s corridor has been the deadliest in the country, though no death has resulted from faulty operations of trains or crossing signals.

Someone asked Soule about ridership, which would be the best metric for determining if Boca Raton is getting its money’s worth. Soule replied, correctly, that the company publishes monthly ridership totals. It’s a condition of a bond Brightline received. But there is no station-by-station breakdown, and the company doesn’t plan to add one.

Boca Raton spent that $10 million to finance most of the garage, which includes spaces for the downtown library that the garage and station displaced. City officials basically relied on Brightline’s economic research to justify the expense. For now, any evidence will be anecdotal.

Mayor Scott Singer approached Brightline three years ago. Last week, he acknowledged that hard numbers won’t be available. But he stuck by the decision, which he repeatedly has called “a game-changer” for the city.

“All the reaction has been very positive,” Singer said. “I’ve gone by and seen lots of cars in the area. I’m very excited.”

Even as they touted the station, supporters asked how visitors to the city would get around. Council members asked about a pedestrian bridge over the tracks.

Soule made clear that Brightline would not contribute any money toward such a project. Singer said the city will look at federal grant money. Brightline is offering travelers a rideshare service called Brightline+ for “last mile” service.”

I asked Councilwoman Andrea O’Rourke how Boca Raton could measure the station’s success. “I’m not sure we can,” she replied. Like Singer, she has heard “very little negative response.” Based on her observations, though, “I think everyone’s leaving” the city. “That’s my concern. I don’t want everyone going to Fort Lauderdale.”

Among the many speakers at council meetings who stated that Brightline would bring new people to the city were representatives of the Festival of the Arts at Mizner Park. That happens in March and might offer some insight.

Though the Boca Raton and Aventura stations opened at the same time, they are very different. Miami-Dade County spent $76 million on the Aventura station to make it part of a commuter rail line. Though some Boca Raton residents will use Brightline for commuting, the main selling point was that the station would bring people to the city.

Is it a “game-changer?” Who knows?

For the second time, Delray Beach has delayed a city commission vote on Old School Square.

As I wrote last week, City Manager Terrence Moore had hoped to put before the commission in December an agreement for the Downtown Development Authority to begin operating the cultural arts complex. The DDA plans to start with the Cornell Museum and go from there.

That didn’t happen. Last week, though, Moore seemed confident that the agreement would go to the commission for today’s meeting. Instead, it’s not on the agenda.

On Friday, the DDA board met to consider the city’s changes to the agreement. Executive Director Laura Simon told me that the board “sent edits back to the city” and staff believed that “it was too close” to the meeting, given that Monday was the Martin Luther King Jr. holiday.

Moore, though, said on Monday that the document had gone back to the DDA. He is now targeting the Feb. 7 meeting. Simon said the agency’s board and staff “want to make sure the agreement is set up for success and provides both the city and the DDA the ability to move forward together to make great things happen.”

The agenda called for the commission to approve negotiations with Waste Management, the trash hauler city staffers had ranked first. Delray Beach’s contract with the company is about to expire.

But there was a twist. Coastal Waste & Recycling, which the staff had ranked second, submitted a new, “best and final” offer that was more than $4 million less than its first offer. The second number—roughly $14.4 million a year—was more than $1 million under Waste Management’s offer.

Obviously, this is why cities set hard deadlines for such contracts. Having seen all the bids, a company could submit a “best and final” number just to come in lowest.

A Coastal representative blamed the city’s tight timeline and the length and complexity of the big proposal. It had gone from about 50 pages to nearly 200 pages. “That should have raised a flag,” he said.

Mayor Shelly Petrolia said, “Something’s not quite right.” City Attorney Lynn Gelin said her office had made “drastic changes” to safeguard the city, given its rocky history with trash contracts. “We can sit here and speculate,” Gelin said, but things had to move quickly to avoid Delray Beach not having someone to collect trash when the current contract expires this year.

The city’s consultant didn’t help matters, fumbling through his presentation and offering little guidance. Even though Coastal’s bid had come late, some commissioners couldn’t get that lower number out of their heads.

So, when the vote came to proceed with Waste Management, Petrolia and Commissioner Juli Casale voted yes. Adam Frankel and Shirley Johnson voted no. A second vote also resulted in a 2-2 tie.

That deadlock happened because Ryan Boylston had a conflict and could not vote. His marketing company represents Coastal. If the company gets the contract, Boylston told me, he will drop Coastal as a client.

There followed the sort of discussion that too often characterizes commission meetings. Johnson seemed confused, referring to the “Coastal Star,” the monthly newspaper and website, when she meant Coastal Waste & Recycling. Casale asked if she could make a motion to negotiate with Waste Management but get to Coastal’s new price, a directive that commissioners can’t give.

At today’s meeting, the commission will vote on again extending Waste Management’s contract, through Sept. 30, after which the new, seven-year agreement that the staff is negotiating would begin. Perhaps this vote will be less dramatic.

Delray to consider study on discrimination in businesses

Also on today’s agenda is approval of a study to determine whether Delray Beach discriminates against women- and minority-owned businesses in contracting.

This disparity study would cost about $250,000. The staff recommends giving the work to Denver-based Keen Independent Research. If the study finds a problem, remedies could include “race and gender-neutral policies and programs as well as narrowly tailored race and gender preference programs,” according to the memo from Assistant City Manager Jeff Oris.

In October 2021, the commission seemed ready to approve such a study, by an Atlanta-based company the staff had ranked first. Then Petrolia, Casale and Johnson balked, even though Petrolia and Casale had supported such a study when they campaigned. They offered vague excuses for their decision.

Critics noted that the company had planned to hire Door 2 Door Strategies to help with community outreach. Door 2 Door is owned by Rob Long, who had angered Petrolia and Casale with comments about the city’s water quality. Long is now running against Casale in the March election.

Though the money for the Delray Beach Open will come from the community redevelopment agency, it’s still city money from a source other than the general fund budget.

According to a memo from Parks and Recreation Director Sam Metott, “The increase in visitors” from the nine-day event “has a direct result in economic benefits for downtown merchants.” The CRA’s focus is downtown Delray Beach.