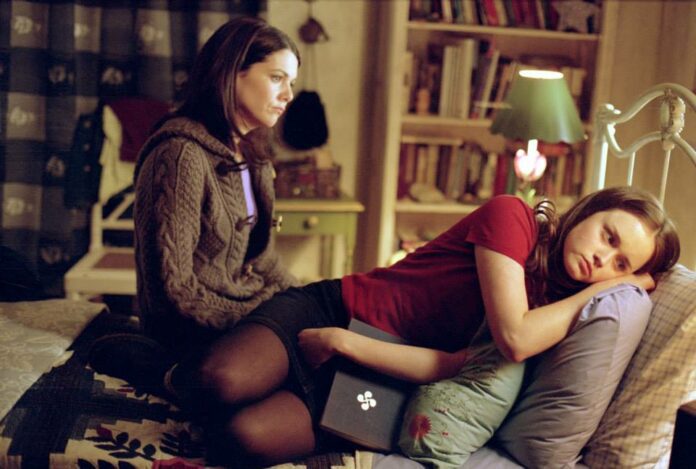 Stock up on Mallomars and coffee and order some chinese food from Al’s Pancake World. All seven seasons of Gilmore Girls are now streaming on Netflix.

The series, which debuted on the WB in 2000, features an inseparable, fast-talking, quick-witted mother-daughter duo played by Lauren Graham (Lorelai) and Alexis Bledel (Rory). We’ll admit that when it comes to production, the show isn’t quite up to par with the likes of Game of Thrones – the first few episodes have choppy transitions and questionable acting – but the storyline, the humor and the spot-on lines are without a doubt some of the best of the early millennium.

Maybe you’re a longtime fan of the show, or maybe you’re just beginning to follow the eccentric residents of Stars Hollow. Regardless, here’s a list of the ten best episodes you don’t want to skip during your Gilmore Girls binge.

Rory visits Dean at Dose’s Market, where he surprises her with her first kiss right in the ant-spray aisle (“a good aisle”). Rory thanks him and then runs out of the store, accidentally stealing the cornstarch in her hand. She runs to tell Lane first instead of Lorelai, who later finds out about the kiss over diner gossip at Luke’s. Lorelai tries to play the cool mom by inviting Dean over to watch Willy Wonka with her and Rory that night. While not exactly the first date Rory had dreamed about, the night offers a first glimpse of what it’s like for an outsider to be a part of the “Gilmore Girl” club.

Trouble’s in town and his name is Jess Mariano. He’s Luke’s nephew who just moved to Stars Hollow to live with his uncle. A Holden Caulfield-type rebel with sarcastic wit and a sullen demeanor, Jess stirs up trouble by putting up police tape and chalking an outline of a body on the sidewalk, stealing garden gnomes and even taking money from the “repair the bridge” donation cup. His antics push Luke so far over the edge that he pushes Jess off bridge into a lake. Jess quicky sets his sights on Rory – stealing a book from her bookcase, only to return it with notes in the margins. She nicknames him “Dodger,” and the two spark a chemistry that would soon shake up Rory’s relationship with Dean.

Stars Hollow holds a charity picnic basket lunch auction, where women make lunch baskets for men to bid on. Lorelai and Rory put together baskets to follow tradition, but the event doesn’t quite hold up in their favor. Dean doesn’t bring enough money for Rory’s basket and is outbid by resident bad boy Jess. Lorelai is being pimped-out by busybody Miss Patty who has brought three men to bid on her basket. Luke saves the day outbidding the other suitors, and he and Lorelai toss the inedible contents of the basket and he makes them lunch at the diner.

It’s time for Stars Hollow annual 24-hour dance marathon, and Lorelai is determined to steal the trophy from four-time champion Kirk. When her partner flakes because of his insecure wife, Rory steps in to help her claim the prize. On the sidelines, Dean cheers them on and even steps in for Lorelai when her heels break. As he and Rory dance, Dean can’t help but notice Rory’s eyes glued to Jess. He decides he has had enough and breaks up with Rory, right there in the middle of the dance floor.

It’s Thanksgiving, and Lorelai and Rory have, not one, but four dinners to hit. At the Kim’s, Lorelai struggles to keep down Tofurky. Lane has snuck her boyfriend Dave in, under the guise of a Christian entertainer. Next they head to Sookie’s where she is drunkenly mourning the loss of her beautiful, expensive, organically grown turkey that Jackson has decided to deep-fry. Next they head to the Gilmore’s and Rory shocks Lorelai with the revelation that she has applied to Yale, Richard’s alma mater. The day ends awkwardly with Jess, Luke, Lorelai and Rory eating together at the diner. Oh and Kirk is attacked by his cat, also named Kirk, while completely nude.

It’s the episode we waited four seasons to see. After having a great time with Luke at Liz’s wedding, Lorelai wonders about the future of their relationship. Emily finally admits to being separated from Richard when Lorelai isolates them in a “romantic” bungalow away from the rest of the inn. Dean comes looking for Rory to talk about their almost-kiss from the last episode. He finds her back home and tells her his marriage to Lindsey is over. Back at the inn, Jason unexpectedly shows up convincing Luke he is still with Lorelai, then angrily confronts Lorelai, who says they broke up. Luke references what he refers to as ‘the moment,’ which occurred when he walked her home. Lorelai agrees they shared a moment and Luke goes in to kiss Lorelai. A naked Kirk, who comes yelling and running down the stairs, interrupts them. Lorelai runs home to find Rory and is taken aback to find Dean leaving her bedroom

Rory gets the chance to crack the story of Yale’s secret society, The Life and Death Brigade. She is blindfolded by Logan and taken into the lavish tent village, where she finds trust-fund kids dressed up in period costumes and speaking without the letter e. In preparation for the night’s “big event,” Logan surprises Rory with a blue evening gown so she could more easily blend in. That night, a scaffolding tower has been set up, with umbrellas on top. Since Finn is out of commission, Logan invites Rory to join the group as they jump from the seven-story scaffold. Rory says it was a once-in-a-lifetime experience, and Logan reminds her it is only if she wants it to be.

Oy with the poodles already! If you can’t already tell, Gilmore Girls is one of those shows that don’t come around too often. The characters and their stories become a part of you from the very first episode. So find the closest television with a Netflix hookup, and get started on your journey to Stars Hollow.

Annie is a senior at Florida Atlantic Univerity working on her B.A in Multimedia Journalism and Sociology. She loves writing about fashion, beauty and entertainment. She hopes to one day be compared to Carrie Bradshaw.