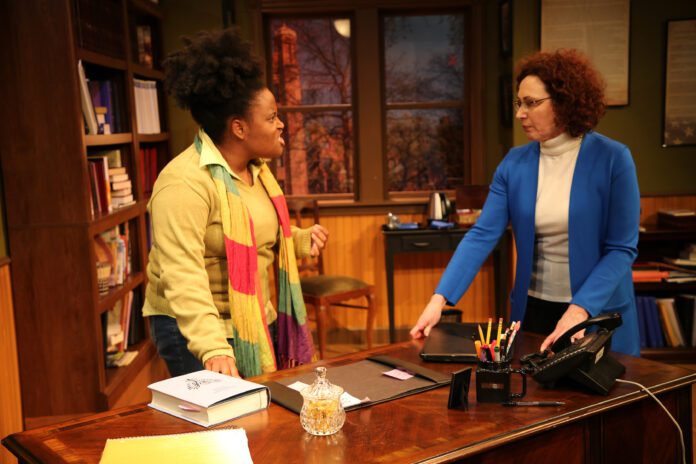 Like David Mamet’s university-set “Oleanna” some 30 years earlier, Eleanor Burgess’ stimulating two-character drama “The Niceties” encapsulates the college zeitgeist of its time, and its ripples into broader society. Cancel culture, white privilege, historical revisionism, generational divides and the inequities of university hierarchies all arise during the play’s riveting production at Island City Stage, a heady swirl of ideas, critiques and lamentations tethered painfully to our present moment. I recognize how hollow this must sound in a year without much theatre, but it’s the best thing I’ve seen on a stage in 2021, a compliment I believe would hold true in a normal season.

Taking place in the spring and summer of 2016, the play is set in the Yale office of history professor Janine Bosco (Lisa Kay King). In a spacious, striking, character-evoking scenic design from Ardean Landhuis, the spines of books visible from Janine’s voluminous library speak to the professor’s rigor and her politics—The Whole Earth Catalog, Blackwater, Ron Chernow’s Alexander Hamilton biography. In a particularly evocative touch, she takes her tea in a Hillary Clinton mug. (In Act Two, a copy of Ibram X. Kendi’s How to Be an Antiracist, a book that wasn’t published until 2019, is prominently displayed—a minor dramaturgical quibble.)

An old-school liberal feminist with an unabashed reverence for even the thorniest aspects of the American experiment, Janine is about to face off against a formidable opponent from the fiery ranks of the 21st century social justice warriors. One of her students, Zoe Reed (Rachel Michelle Bryant), has booked an appointment with the professor to discuss her thesis, which provocatively asserts that “a successful American Revolution was only possible because of the existence of slavery.”

Janine admires Zoe’s spunk; after all, she “invites debate.” But the professor cannot support a thesis seemingly unbound from the canon of historical research, bemoaning her student’s reliance on websites to support her argument. Or does she simply chafe at any position that puts her beloved Founding Fathers and our first president, who gazes at their dialogue from a portrait in her office, in a negative light?

What begins as a discussion of a term paper escalates into a roiling debate about racisms past and present. In Zoe’s brutally elegant phraseology, America is “an engine of racial oppression” that continues to subjugate people of color, citing Jim Crow on through to the injustices of the prison-industrial complex. (If the play were written today, she would add voting-rights legislation to that litany.) For Janine, America is an imperfect institution forever progressing toward equality. After all, we have our first Black president, and “we’re about to have our first female president.” The African-American student in front of her is earning an education at Yale.

“The Niceties” is an excellent play in part because, for a while, both characters are right. Cogent points are rebutted with rapier counterpoints, and so on, but as this confrontation rages on, the patches of common ground these women once shared erode into scorched-earth invective, and we encounter both of them at their worst.

Director Michael Leeds stages this tet-a-tet with ratcheting intensity, crafting an experience as taut and piercing as razor wire. Occasionally, the actors talk over each other, and we miss a few words, which only adds to the impassioned verisimilitude. King and Bryant both inspire and provoke as realistic advocates for their worldviews. Nothing can take an audience member out of a play’s diegesis than watching an actor discourse on topics in which they themselves do not seem adequately versed; that is hardly the case here, each character persuasively articulating her perspective.

King plays Janine as the character most visibly on the defensive, pacing the room with her hands buried in the pockets of her coat, and realizing, as the power dynamics of the play shift, that deference to her young adversary may be the only way she can keep her job. Seasoned with nuanced eye moments and Machiavellian undercurrents, Bryant anchors Zoe in the absolute unflappability of the true believer. She is such a formidable rival because she doesn’t give an inch, and does not care how many bridges she has to burn to get there. If that means alienating most members of the audience of this play, then so be it.

Indeed, most viewers will agree that Zoe’s use of blackmail as activism is just the sort of unhelpful “liberals eating their own” purism that is dividing the left. Yet so many of her arguments are irrefutable. “The Niceties” ultimately is a rebuke of cancel culture, inasmuch as “Oleanna” was a polemic against political correctness, but it offers a valuable platform for uncomfortable opinions, demanding to question who gets to write our history. Burgess doesn’t claim to have a satisfying answer, which makes the cumulative effect of these two excoriating hours all the more tragic.