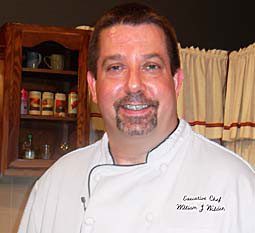 That, at least, is the story of chef William Walden, whose run at West Boca’s Bistro Gastronomie—and the restaurant itself—had approximately the half-life of bacteria, closing after less than six months in business.

But come later this month, Walden will be back, and at the old Bistro Gastronomie location in the Yamato Village Center no less. This time, though, the restaurant is La Ferme bistro, with Walden teaming up with New York restaurateurs Bobby, Laura and Alexandra Shapiro.

The Shapiros are veteran operators, owning two eateries in Manhattan as well as several other restaurants in other parts of the country over the years. Walden too is a restaurant vet, with a resume that includes stints on the “Great Chefs” TV series and several highly regarded spots in Virginia.

At La Ferme the French influence will still be strong, though at a lower price point than Gastronomie. Look for such classics as escargot, salad nicoise, foie gras torchon, steak frites, beef Bourguignon, and skate with brown butter. Design is be Wilton Manors-based Shuster Design Associates, who’ve crafted a 120-seat space with indoor and outdoor dining areas and a spacious bar.

You can never have too much good French bistro cookery, IMHO, so I hope La Ferme has a longer run than its predecessor.

P.S. This blog will be taking a short vacation starting today. I’ll be in California hanging with friends and family and will return next week, when we’ll pick up where we left off. . .