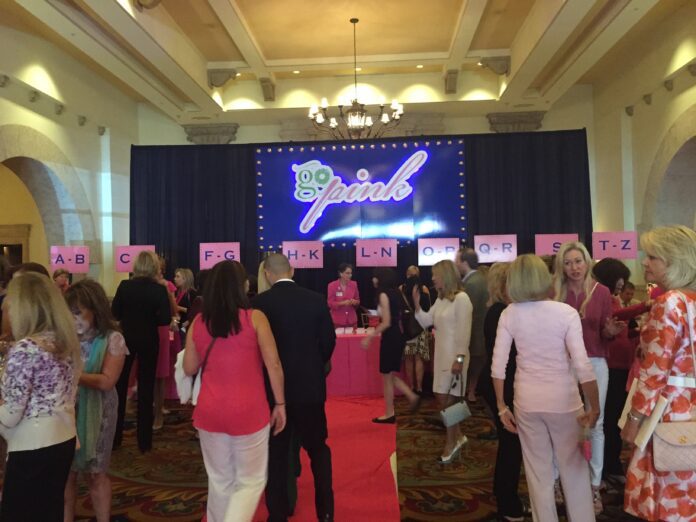 It was a pink-tie affair—not to mention the pink dress shirts, pink blouses, pink handbags and pink ribbons—at this afternoon’s Go Pink luncheon at the Boca Raton Resort & Club, where the color of breast cancer awareness dominated both the couture and décor of the Mizner Center ballroom.

A record audience of 1,500 walked the pink carpet and sat around (mostly) pink-clothed tables to raise funds for Boca Raton Regional Hospital’s breast cancer programs. Saks Fifth Avenue donated a check for $21,000 from its Key to the Cure initiative, and factoring in the $175 tickets, monies raised during live and silent auctions, and individual contributions provided by attendees, the BRRH Foundation expects to exceed its goal of $1 million in proceeds for this 12th annual event.

The reason for the capacity crowd and emptied wallets? Martin Short might have something to do with it. One of the Foundation’s most impressive guest speakers in its dozen-year history, the actor-comedian is no stranger to the scourge of cancer: He lost a mother, a girlfriend (Gilda Radner), a wife of more than three decades (Nancy Dolman) and a dear friend (Nora Ephron) to the disease, but it hasn’t brought him down: On the contrary, as Foundation President Mark Larkin announced in his introduction, Short’s “upbeat philosophy is contagious and enduring.”

Taking center stage—he was literally in the center of the ballroom, surrounded on all sides by round tables, his face projected onto more than a half-dozen giant screens mounted around the room—Short didn’t shy away from discussing the health misfortunes of his loved ones. But, he said, “I have never become a victim of [cancer’s] losses. I have become empowered.”

Working from prepared notes, Short eschewed the song-and-dance and character work that’s customary to his live appearances, and instead spoke from the heart, with wit, insight and poignancy. He shared cancer-related stories from his best-selling autobiography I Must Say and even adopted the style of motivational speaker in his explanation of his therapeutic “Nine Categories” of human happiness. And he vigorously championed BRRH’s early detection and prevention programs.

Short was funniest when firing off politically incorrect one-liners, sounding like a self-deprecatory comic one minute, a roastmaster the next. On his appearance at this event: “It’s a thrill. In fact, it’s more than a thrill. It’s an obligation. It’s OK that I wasn’t the first choice, because Gary Busey is such a different type.” On Foundation president Mark Larkin: “He’s so boyish-looking, at first I thought he was k.d. lang.” On his native country of Canada: “We’re the aliens Donald Trump doesn’t want to deport.”

Indeed, pop culture figures were not let off easy. On his frequent dieting: “I’ve been on Jenny Craig more than Mister Craig.” On Trump’s narcissism: “He’s a man who screams his own name during sex.” On practical life advice: “Never carpool with Suge Knight. Never ask Bill Cosby to mix your wife a drink.” On the cerebrally challenged Kim Kardashian: “She thinks soy milk means ‘I am milk.’”

He closed his presentation by toasting the friends and relatives he and everyone in the room has lost to cancer, along with the many survivors in attendance, stating that “this is a war that will be conquered, [thanks to] the wisdom and generosity” of those gathered today.” But he couldn’t resist one last, unscripted barb as he raised his Champagne flute: “I like my Champagne like I like my women—complements of Boca Raton Regional Hospital!”