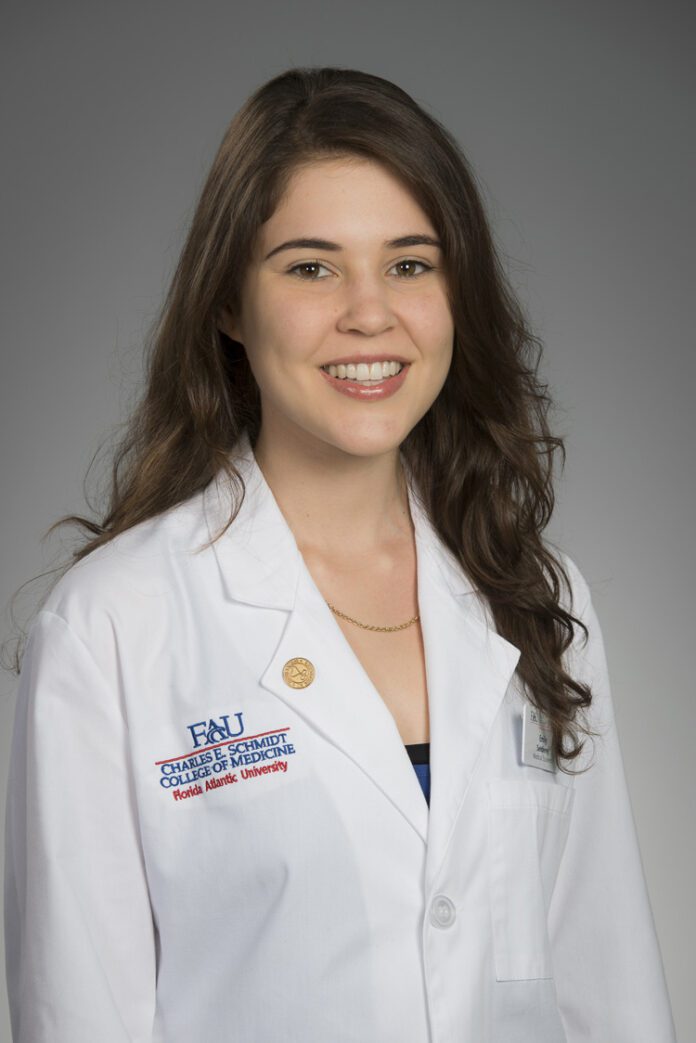 When the first graduating class to receive Doctor of Medicine degrees exited the stage this past April at Florida Atlantic University, it forever altered the identity of more than just the 53 students who officially became physicians.

Thanks to the Charles E. Schmidt College of Medicine at FAU, the city of Boca is producing doctors. Think about that. Two decades after serving as the fictional South Florida home to Jerry Seinfeld’s parents, our town is now producing the next generation of health-care professionals.

Emily Senderey is one of those aspiring physicians. The 22-year-old was the first person to graduate from FAU’s prestigious Wilkes Medical Scholars Program, which grants early admission to the College of Medicine; Senderey actually completed her inaugural year of medical school during her senior year of undergraduate work.

As part of its ongoing “How Does It Feel?” series, Boca Raton magazine asked the second-year med student if, from time to time over the next few years, she would share with readers what it’s like to pursue her White Coat dream. The daughter of Ruben and Beatrice Senderey, longtime owners of renowned Senderey Video Productions in Lauderhill, agreed to take an occasional break from her studies and document her journey.

Throughout college I was labeled the “non-partier,” which to me was like being labeled “lame” or “not fun.” I was never interested in spending the night out with large groups or having superficial conversations. At the time, minimizing my social life was contributing to my undergraduate success, which meant everything to me. I justified my “lameness” by thinking that my future medical school classmates also would have no social life.

To my surprise, they did. Many go out on weekends, they party—and manage to do extremely well. Their stellar work-life balance made me question my own. Was I doing something wrong? Did I need to change my grandma habits of going to bed at 9 and waking up before the sun rises?

Medical school pushed my boundaries, not just academically, but socially. And in doing so, I accepted that not being a partier did not define who I was; it’s just part of who I am. And who I am is why I live a life filled with love, happiness and success.

As long as I can remember, I wanted to study medicine; my parents used to call me their “little doctor.” With most kids that changes somewhere along the line. And I’m sure people who knew my parents assumed my childhood interest would fizzle. Even after I was accepted into the Wilkes program, I recall the parents of one of my friends saying, “You want to be a doctor? We always thought you would go into the arts.”

My older brother and sister did; they both pursued the family business. Not me. I think about that sometimes. Why me? The only person in our family with a medical background was my mom’s father, who was a physician in the military, an anesthesiologist. He died when my mom was in her 20s, but she had the most profound respect for him and his career. I think, subconsciously, that may have been a stimulus for my interest in medicine; his spirit is definitely part of this journey.

My parents’ spirit is with me, as well. What they did, to me, is 10 times more difficult than what I’m doing.

My father had been in the Israeli Army, and afterward he travelled to France, where he met my mother. They fell in love. A few years later, my father continued his travels and came to Florida. My mom followed him. And they both decided to stay. They came to the United States with nothing, and they built this wonderful business. I’m so proud of them. It wasn’t easy. To me, that’s much more challenging than the track I’m on. I don’t have to worry about whether I’ll have to leave this country. Or whether or not I’m going to eat tonight.

What have I inherited from my parents? Their work ethic. Absolutely. During orientation week last year, we were told that any study habits we had developed over the years would not work in medical school. There’s too much information and not enough time to process it. Imagine thinking that everything you’ve done to get to that point wasn’t going to be good enough moving forward.

But I dug in. I realized that I didn’t have to change my approach. I just had to believe in it. And so far, it’s worked. For me, part of that process involves talking to myself. In the car. In the shower. I’ve always done this. The idea is to teach, out loud, what I’ve been studying. It’s an opportunity to slow down my thoughts, break them down and verbalize the wealth of complex information in a way that’s palatable.

Give me the stress that comes with a good challenge. I invite it. I thrive on it. And I think it’s going help to make me a better doctor.