Miami’s Immersive “Beyond Van Gogh” Lives Up to Hype 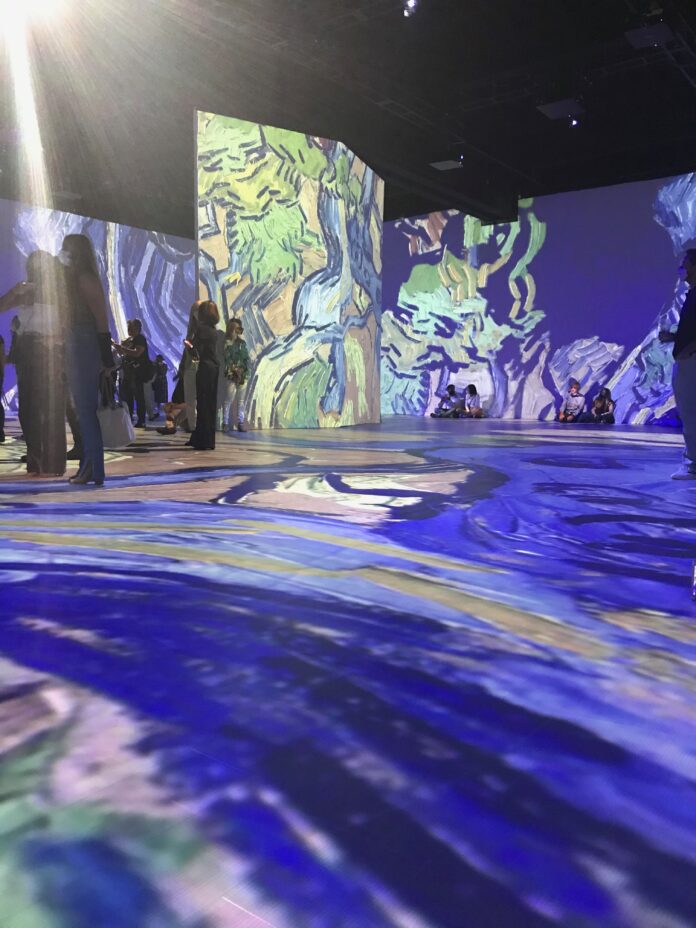 Ice Palace Studios, the host venue for the touring “Beyond Van Gogh” exhibition, is as nondescript as the exhibit is sumptuous. Motoring down North Miami Avenue, you’re likely to drive right past the low-slung white building—as we did for this past Tuesday’s press preview of the long-awaited attraction.

Once inside, however, your car in the capable hands of a valet attendant, the atmosphere grows immediately Edenic. A grassy hangout spot, incongruent in the concrete jungle of central Miami, features bright yellow picnic tables and red hammocks slung between jungly palms. A cage with water and food services at least two families of baby chicks.

It’s a warm and peaceful setting, one that primes the pump for the exhilarating blanket of color and sound that await inside.

South Floridians are the first audiences to immerse themselves in this innovative concept developed in Montreal’s Normal Studio. Co-creator Mathieu St-Arnaud, introducing the exhibition at the media preview, said the exhibit allows us to “step inside the paintings to meet Vincent.”

Attendees enter through a mazy series or corridors in which biographical information about Van Gogh, and famous quotes attributed to him, shine from vivid projection screens, interspersed with empty picture frames: a testament, perhaps, to the novelty of a Van Gogh exhibition that does not actually include any Van Gogh paintings.

The next room, a sort of stylish vestibule, offers a sneak preview of the technology that beckons in the main gallery space. Psychedelic whorls of digital paint spackle and smother the wall, snaking around doorways with site-specific direction, and ultimately morphing into an iconic image of Van Gogh himself.

But nothing can truly prepare audiences for the experience in the capacious main space, a hybrid that’s equal parts museum retrospective, video essay and light show. For 30 to 40 minutes, some 300 of Van Gogh’s paintings materialize, as if summoned from the hand of the master himself, on all four walls, a pair of vertical screens and the floor itself.

Sometimes they appear as patchworks of paintings spreading across the space like a quilt; other works, like “The Starry Night,” comprise the entire wall, twitching with life. His portraits, of himself and his confidantes, seem positively alive; I swear I saw them wink at me. In Van Gogh’s nocturnal landscapes, the stars twinkle, casting ribbons of light on the rippling water below. In other words, we do indeed “step into Van Gogh’s world,” in St-Arnaud’s words.

We see the “truer than true” colors that existed only in the artist’s mind, fostering his feverish visions; they arrive on the walls in a tidal rush, one daub of paint at a time. We see how a single brush stroke can become an entire monochromatic village, which is then swathed in motley hues. As one suite of artworks eventually smothers the previous one, every masterwork begins to function as its own coat of primer.

The takeaway from this experience—one beautifully accompanied by instrumental selections from the Beatles, Pat Metheny and other evocative offerings—is that for pioneers like Van Gogh, art is always in motion. It is not a static construct on a canvas. It is a river, not a pond.

It is impossible to absorb everything at once in “Beyond Van Gogh.” FOMO is inevitable: If you’re watching a sunflower blossom on one wall, you’re missing a different nature field on the opposite wall. Which is ever more reason for a return visit, to once again immerse yourself in an endless loop of beauty.