Mike Birbiglia ‘Thanks God for Jokes’ 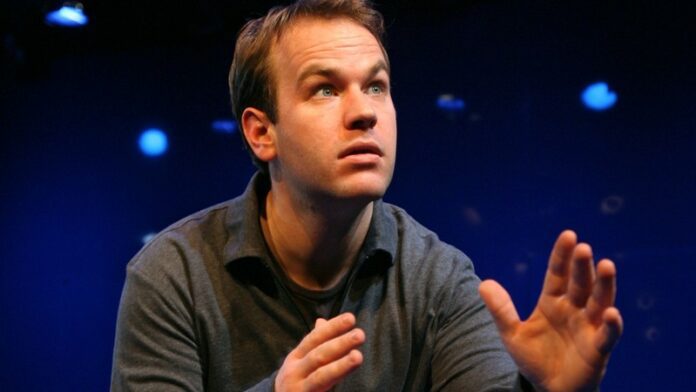 At one point last night, in his performance at the Arsht Center, Mike Birbiglia said (and I’m paraphrasing from memory), “I guarantee that you told someone who you were going to see tonight, and they said, ‘who?’ I’m a niche, and I’m fine with that.”

This statement is both true and not entirely genuine. While he may not have cracked the standup A list—the Seinfelds, the Mandels, the Mahers—he occupies a space in comedy that allows him to play glittering venues like the Arsht, and to structure his humor as a theater and storytelling more than traditional comedy. His name may not ring a bell in a large percentage of the American populace, but that’s on them, not him—and his star is only increasing every year.

That said, Birbiglia was not exactly in top form on the Florida leg of his exhaustive “Thank God for Jokes” tour, his first South Florida appearance since he brought his one-man show “My Girlfriend’s Boyfriend” to Coral Springs in 2013. When the lights dimmed at the end of his set, he was met with a standing ovation from his die-hards, but I could count the show’s gut-busting laughs on fewer than one hand. Where his previous shows hinged on marvelously sustained storytelling complete with imaginative physical humor and the occasional video-screen prop, “Thank God for Jokes” felt like a bit of a shamble, tenuously structured around a theme of comedy deconstructionism—what’s funny and in what context, and what isn’t?

It was all, as far as I could tell, autobiographical, as Birbiglia’s best material often is, and its anchors included a bit about yoga (which he defined “trying not to fart while stretching”); an overextended routine about nut allergies and airplanes; his experience of being arrested in New Jersey; and a very funny ramble about parasitical mice in Massachusetts. A bit about Jesus returning from the dead and sounding like Woody Allen (because he was a “socialist Jew—the least popular demographic, especially with Christians”) suggested that he can kill with political humor, which usually isn’t his style. Like the talented long-form storyteller he is, he occasionally circled back to earlier themes and comedic philosophies through the form of elegant callbacks.

But there’s no question that “Thank God for Jokes” missed the cohesion of his previous shows. As a more conventional standup act, it left room for plenty of crowd work, not all of it successful: By prodding an audience member about his uneventful arrest and getting few nuggets of comic gold from the interaction, Birbiglia stopped the show’s momentum dead in its tracks. And one punch line fell so much flatter than expected that Birbiglia’s follow-up comment didn’t make sense.

He saved his best, if also his most esoteric, material for last: a retelling of his hilarious, disastrous hosting of an awards show in which he resurrected a dark chapter from director David O. Russell’s past, with Russell sitting stone-faced a few feet in front him. But even here, the final sendoff didn’t feel like a closer; it was one more joke in need of a broader vision.